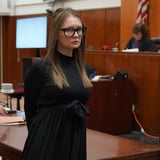 “Fashion show! Fashion show! Fashion show at lunch!” is my exact reaction to learning that Anna Delvey – otherwise known as the “Soho Grifter” or by her real name Anna Sorokin – pretty much put on a fashion show for the jury at her trial. Though this detail of Sorokin’s sordid history of conning her way into New York’s most elite circles feels like something straight out of a fictional TV show (like Netflix’s upcoming dramatization of her story, “Inventing Anna”), it’s very much real. After all, if you’re going to pose as an innocent socialite, you’ve got to look the part.

When trial photos surfaced of Sorokin clad in a black dress with a plunging neckline, it got people talking – and understandably so. But it also left everyone wondering how she came into the possession of an Yves Saint Laurent blouse and Victoria Beckham pants while behind bars.

According to The New York Post, Sorokin’s attorney, Todd Spodek, made an associate run to H&M “and spend $200 on something that didn’t scream ‘inmate‘” in order to sway the jury’s opinion regarding Sorokin’s “guilty-looking” appearance. Sorokin, who arrived in her Rikers Island prison uniform, did a quick 180 and appeared before the court sporting a black blazer over a beige sweater, black capris, and white Puma sneakers. (Her legal team originally got her pointy stilettos to wear, but the Department of Correction denied the footwear citing it as “too dangerous.”) The wardrobe crisis was averted, and it was just the beginning of Sorokin’s courtroom runway.

Spodek and his legal team later upped the ante. In a 2019 email to GQ, Spodek confirmed he hired Sorokin a stylist. “It is imperative that Anna dress appropriately for the trial. Anna’s style was a driving force in her business and life, and it is a part of who she is. I want the jury to see that side of her and enlisted a stylist to assist in slecting [sic] the appropriate outfits for trial. However the logistics of dropping off trial outfits at Rikers Island doest [sic] not work in our favor,” he wrote.

Her first of many buzzworthy looks included an all-black ensemble of tights, flats, a choker necklace, and that infamous black dress with the plunging neckline. Notably, Sorokin’s pin-straight hairdo looked like she had just stepped out of Drybar. The following day, Sorokin walked into court wearing that Saint Laurent blouse and Victoria Beckham pants. The mastermind behind these iconic courtroom outfits was stylist Anastasia Walker, whose A-list clientele includes T-Pain and G-Eazy.

As backward and twisted as all this may seem, Sorokin having a stylist for her trial – where she was ultimately found guilty of conning $275,000 from friends, businesses, and banks – may just be the most authentic thing about her.

Ukraine crisis: Putin and Macron ‘to speak on phone’; US says 40% of Russian...

How crazed Putin ‘bathes in blood of DEER ANTLERS to boost his sex drive’...