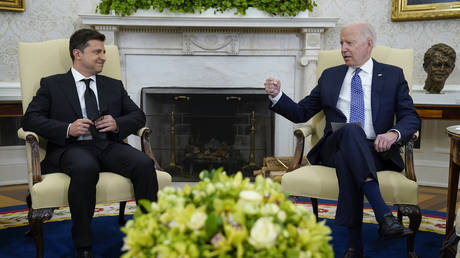 The Ukrainian President has publicly stated he wants to remain in Kiev, however

US government officials are prepared to assist Ukrainian President Volodymyr Zelensky’s evacuation from Kiev and have been discussing safe places where he could represent the Ukrainian government in exile, the Washington Post reported on Friday.

According to the newspaper, which cited a “senior U.S. official,” US government representatives “in recent days have spoken to Zelensky about a variety of security issues, including the safest places for the president to situate himself to ensure continuity of the Ukrainian government.”

House Intelligence Committee Chairman Rep. Adam Schiff (D-CA) made similar comments, claiming that the US government had been trying to make Zelensky “aware” of “the threat to him personally” and was “ready to assist him in any way.”

An unnamed Ukrainian official also told the Washington Post that Zelensky’s own security team was prepared and standing by to evacuate him to a safe place, however Zelensky has refused to leave Ukraine’s capital as the conflict with Russia continues.

On Friday, after the White House said it was “working to provide” Zelensky with “a range of support,” the Ukrainian president published a video showing him and his aides on the streets of Kiev.

“We are all here, our soldiers are here… we are defending our independence,” he said, appearing to confirm that he would not leave the city.

Explosions were reported in north-west Kiev on Saturday as Russia’s “special operation” entered its third day.

Conflict broke out after Russian President Vladimir Putin announced a military action aimed at “demilitarizing” and “denazifying” Ukraine. Moscow has said the offensive as a necessary measure to protect the Lugansk and Donetsk People’s Republics in the Donbass, which formally requested Russian military assistance this week against “Ukrainian aggression.” Kiev, however, denied that it was planning to reclaim the breakaway republics by force, accusing Moscow of an “unprovoked” attack. The West, including the US, UK, the EU and NATO all condemned the Russian military action, slapping sanctions on the country’s economy and high-profile public figures and officials. The Russian President and his Foreign Minister Sergey Lavrov have been personally targeted in the latest wave of sanctions, announced by the EU, US and Canada.

Catcoin Crypto – Here Is Why $CATS Jumped 700% In The Market

Will Spark (FLR) Token take the Crypto Market By Storm in 2022?

‘Holy cow … are you kidding me?’ Scientists stunned to see plants grow in...