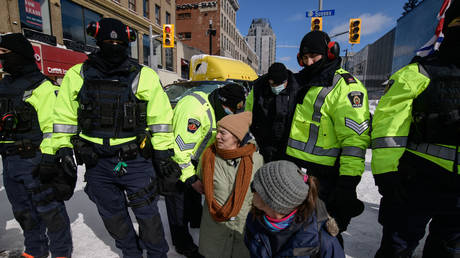 A US congresswoman has promised to introduce legislation to grant asylum to Canadian truckers facing persecution from their government for being involved in the recent ‘Freedom Convoy’ protests against Covid-19 restrictions.

Arguing that Canada’s treatment of protesters “is not the action of a Western Democracy,” Herrell said the US should provide asylum for protesters “who have been subjected to violence, had their property confiscated, and their bank accounts frozen by a government that is quickly becoming the embarrassment of the free world.”

“I am introducing legislation that would temporarily grant asylum to innocent Canadian protesters who are being persecuted by their own government,” she said.

Trump’s ‘whole house is crumbling’ — and there are ‘no good answers’: Former federal prosecutor

Viral videos appeared to show police trampling protesters with horses, pepper-spraying journalists, and using a rifle stock to beat a man who had already been knocked to the floor.

Many protesters, including the organizers of the demonstration, were arrested this week, while the emergency powers invoked by Trudeau allowed authorities to freeze the bank accounts of protesters.

Interim Ottawa Police Chief Steve Bell vowed on Friday to hunt down those who were involved in the protests and punish them.

“If you are involved in this protest, we will actively look to identify you and follow up with financial sanctions and criminal charges,” Bell warned, claiming that the investigation would “go on for months to come.”