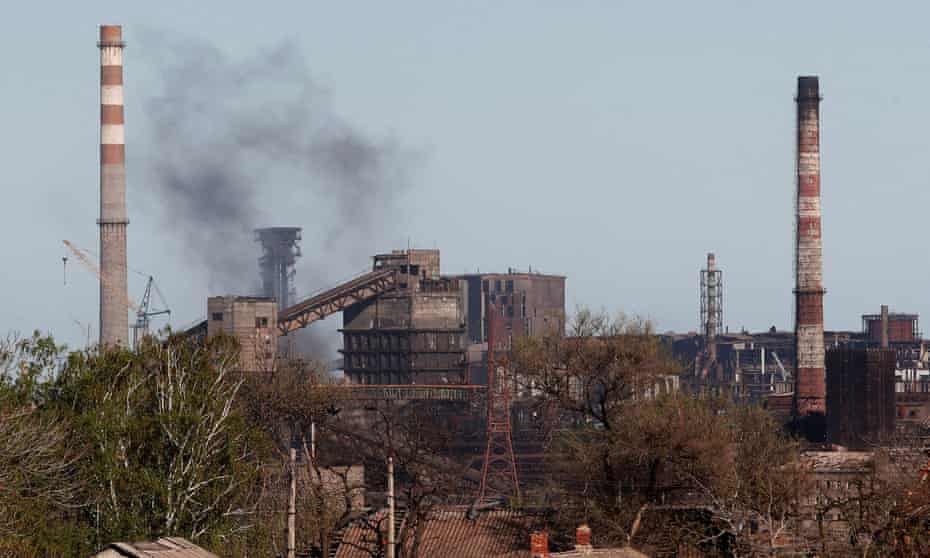 The first group of civilians who have been sheltering under a steel plant that is the last redoubt for Ukrainian forces in the destroyed city of Mariupol have managed to get out.

A senior Ukrainian soldier inside the Azovstal steelworks said about 20 women and children had left, as the US House speaker, Nancy Pelosi, met Volodymyr Zelenskiy in Kyiv, where she pledged support for his country’s “fight for freedom”. Pelosi, whose visit was not announced beforehand, is the highest-level US official to meet the Ukrainian president since the war began.

About 1,000 civilians and 2,000 Ukrainian fighters are believed to be sheltering underneath the Azovstal steel works, the only part of the ruined city not taken by Russian forces.

Late on Saturday, a senior soldier with the Azov regiment at the Soviet-era steelworks said 20 women and children had managed to get out. “We are getting civilians out of the rubble with ropes – it’s the elderly, women and children,” Sviatoslav Palamar told Reuters. On his Telegram channel, Palamar called for the evacuation of the wounded: “We don’t know why they are not taken away and their evacuation to the territory controlled by Ukraine is not being discussed.”

Russia’s defence ministry said on Sunday that 46 people had left the Azovstal works, according to the state news agency Ria Novosti.

Russian forces have obliterated the once thriving port city of Mariupol, a major target for Moscow because of its strategic location near Crimea, which Russia annexed in 2014.

Meanwhile, Zelenskiy released footage on Sunday of an earlier meeting between him, Pelosi and the US House representatives Jason Crow, Jim McGovern, Gregory Meeks and Adam Schiff. The US speaker pledged America’s support “until the fight is done”.

“We are visiting you to say thank you for your fight for freedom,” she said in video footage released on Zelenskiy’s Twitter account. “And that your fight is a fight for everyone, and so our commitment is to be there for you until the fight is done.”

Last week Joe Biden called for a $33bn (£26bn) package of military, humanitarian and economic support for Ukraine, more than doubling the level of US assistance to date. The US president asked Congress to immediately approve the aid, which dwarfs Ukraine’s entire defence budget.

While the US is increasing support for Ukraine, Germany’s chancellor rejected criticism that Berlin was not doing enough. In an interview with Bild am Sonntag, Olaf Scholz said he took decisions “fast and in concert with our partners”.

Ukraine is now looking to China, as well as other permanent members of the UN security council, to provide security guarantees. In an interview with the Chinese state news agency Xinhua released on Sunday, Ukraine’s foreign minister, Dmytro Kuleba, said the proposal for China to provide a security guarantee was “a sign of our respect and trust in the People’s Republic of China”.

On the 67th day of the war, Russia continued its refigured campaign to seize parts of southern and eastern Ukraine, after failing to take Kyiv. Russia’s defence ministry said on Sunday it had attacked an airfield near Odesa and claimed to have destroyed a hangar that contained weapons provided by foreign countries. “High-precision Onyx rockets at a military aerodrome in the Odesa region destroyed a hangar with weapons and ammunition from the United States and European countries, and also destroyed the runway,” said a spokesperson for the Russian defence ministry, quoted by Ria Novosti. The report has not been independently verified.

Meanwhile, the governor of Kharkiv warned residents on Sunday not to leave shelters because of “intense shelling”. Oleh Synyehubov asked residents in the north and eastern districts of the city, especially Saltivka, not to leave their shelters unless it was urgent.

In his nightly video address on Saturday, Zelenskiy urged Russian troops not to fight in Ukraine, saying even their generals expected that thousands more of them would die.

He accused Moscow of recruiting new soldiers “with little motivation and little combat experience” so that units gutted early in the war can be thrown back into battle. “Every Russian soldier can still save his own life,” Zelenskiy said. “It’s better for you to survive in Russia than to perish on our land.”

As the first civilians were reported to have left the Azovstal plant, pictures showed a dire situation for the several thousand who remained.

Video and images shared with the Associated Press by two Ukrainian women who said their husbands were among the fighters refusing to surrender at the plant showed unidentified men with stained bandages, while others had open wounds or amputated limbs.

A skeleton medical staff was treating at least 600 wounded people, said the women, who identified their husbands as members of the Azov regiment of Ukraine’s national guard. Some of the wounds were rotting with gangrene, they said.

In the video the men said that they were eating just once daily and sharing as little as 1.5 litres of water a day among four people, and that supplies inside the besieged facility were depleted.

AP could not independently verify the date and location of the video, which the women said was taken in the last week in the maze of corridors and bunkers beneath the plant.

The women urged that Ukrainian fighters also be evacuated alongside civilians, warning they could be tortured and executed if captured. “The lives of soldiers matter, too,” Yuliia Fedusiuk told the news agency.

Associated Press contributed to this report.

Diane Keaton Has Not Had a Date in 35 Years Yet Became a Mother...