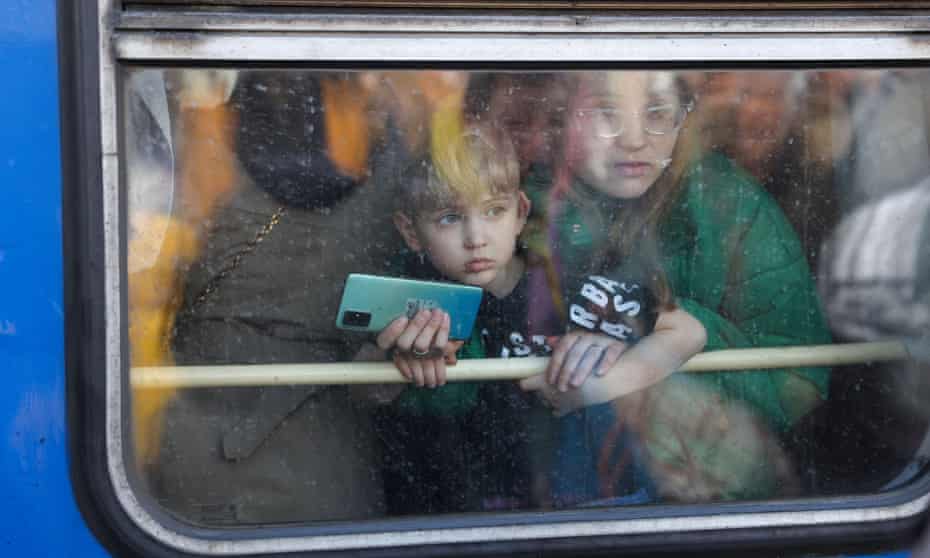 The missile left a crater two metres’ deep, twisted shards of metal beside a playground slide, and shattered glass below the windows of a nearby kindergarten. Dozens of homes were scorched or shredded, their inhabitants turned into some of Kyiv’s first war refugees.

In one apartment block 10 floors of kitchens, living rooms and bedrooms sat open to the skies, their balconies, doors and windows broken off or shattered into pieces by the weapon that brought the Russian invasion to this corner of the city.

The missile hit soon after 4am on Friday, before Russian troops reached the city outskirts, or Ukrainian troops set up defensive positions in its historic centre.

“People are grieving. This is already a tragedy,” said Gorban Abasov, a 70-year-old singer. Most of the people who lived there were pensioners like him, he said, none had army links and nearby buildings were civilian as well.

There was no reason for a such a lethal weapon to land here, but none of those gathered to inspect the damage seemed surprised that civilians were already in the line of fire, even before the battle for Kyiv had really begun. After all, there was no reason for Russian troops to be in their country, beyond the terrifying whim of an ageing autocrat.

As Abasov stared at the ruins of his home, Ukrainian soldiers were already taking up position in Kyiv’s historic centre and its strategic bridges across the Dnieper and fighting advance Russian forces on its outskirts.

While it is not yet clear what future Vladimir Putin envisages for Ukraine if his invasion succeeds, it is clear he wants to hold the capital and dismantle the government of Volodymyr Zelenskiy, which he attacked on Friday as a “gang of drug addicts and neo-Nazis”.

Zelenskiy, who is Jewish, has vowed to stay in the city to fight for it, despite offers of evacuation. On Friday evening he posted a video, filmed on the streets of the capital, showing him in military fatigues and standing with the prime minister and other key political leaders, proving he had not fled. “All of us here. We are defending our independence. And we will continue to do so. Glory to our male and female defenders. Glory to Ukraine.”

The ex-president Petro Poroshenko, once a political rival now an ally against Russian aggression, also held a gun during a live television interview from the streets of the capital.

City authorities had urged residents to stay home but prepare molotov cocktails for a citizen uprising against Russian fighters if they broke through defensive lines. In one district they handed out rifles to any citizen who wanted to fight and the defence ministry opened the army to any Ukrainian citizen. “Bring only your passport and social security number. There are no age restrictions,” the ministry said in a public post.

The invitation to fight was taken up by so many Ukrainians of all ages and backgrounds that the recruiting office was overwhelmed. “They told us: ‘Come back tomorrow morning, we haven’t even eaten all day, have mercy on us,’” said Sergey, an Oxford-educated civil servant who tried to join the city defence force on Friday morning.

The night before, Kyiv had been rife with rumours of an all-out assault to seize control of the streets and government buildings, capture or kill officials, and make way for a puppet government, fuelled by tweets from the US senator Marco Rubio.

Many Kyivites spent the night in metro stations or bomb shelters because of these warnings, perhaps one reason why the missile strike caused so much damage but only injured four people. It was one of a series of blasts that shook the city awake soon after 4am; another was caused by a Russian plane that crashed into residential buildings. The wail of air raid warning sirens followed soon after, calling those not already underground to take shelter.

The city’s mayor, the former world heavyweight boxing champion Vitali Klitschko, said the city was in a “defence phase” and warned of undercover Russian “sabotage groups” in a briefing on Friday, but the assault had already got much further than that.

There were gunfights reported in northern Obolon district and photos circulated of soldiers readying to defend Podil, a riverside port district that is home to a historic university and crammed with fashionable bars and restaurants that make it Kyiv’s answer to Brooklyn in New York or Shoreditch in London.

The days-long fight for control of Hostomel airport on the city outskirts, which has a long runway that would allow Russia to land heavy transport planes, intensified. Elsewhere, in parts of the city where the war had not quite arrived, the streets were eerily empty, apart from long but calm queues outside pharmacies and supermarkets, as a remarkably stoic population stocked up for a possible siege.

The city council asked citizens to stop livestreaming the streets and avoid posting pictures of soldiers and army positions, in case it aided Russian troops. Only the roads leading westward to relative safety were still crammed, as a last surge of refugees tried to escape the coming bloodshed. The caravan of cars, most packed with people, pets and possessions, often came to a complete halt as roads were overwhelmed by the flood of exiles.

The railway station was also swamped with crowds desperate to escape. Guards fired warning shots at one point to prevent a stampede among hundreds of people who stormed carriages as they pulled in. Those who stayed took heart from news of Ukrainian forces’ success in many battles around the country, which apparently slowed plans to encircle Kyiv.

British authorities said on Friday that most Russian troops were still more than 50km (30 miles) from the capital, and had opened a new advance towards Kyiv having failed to capture the city of Chernihiv, which they had hoped to use as a staging post.

Videos also circulated on social media showing unarmed Ukrainians attempting to tackle the invaders, including one of a man stopping a convoy of armoured vehicles by running into the road and shouting at them. Another showed a woman shouting abuse at soldiers and telling them to put sunflower seeds in their pockets, so when they were killed on Ukrainian soil, flowers would grow from their corpses.

But for all the mood of defiance, there was also a resignation to bloodshed ahead, in an all-out fight against an enemy whose tactics in other wars have included targeting civilians.

Anatoly Grigovivch, 64, had defied the air raid sirens to race over to his daughter’s legal firm, which had been torn apart by the missile that exploded next to the apartment block. He was worried about looters.

“I wouldn’t have minded if they hit that tax office,” he said, grimacing after climbing through what was once a glass door. “They just hit people with this missile, do you see any tanks here?” 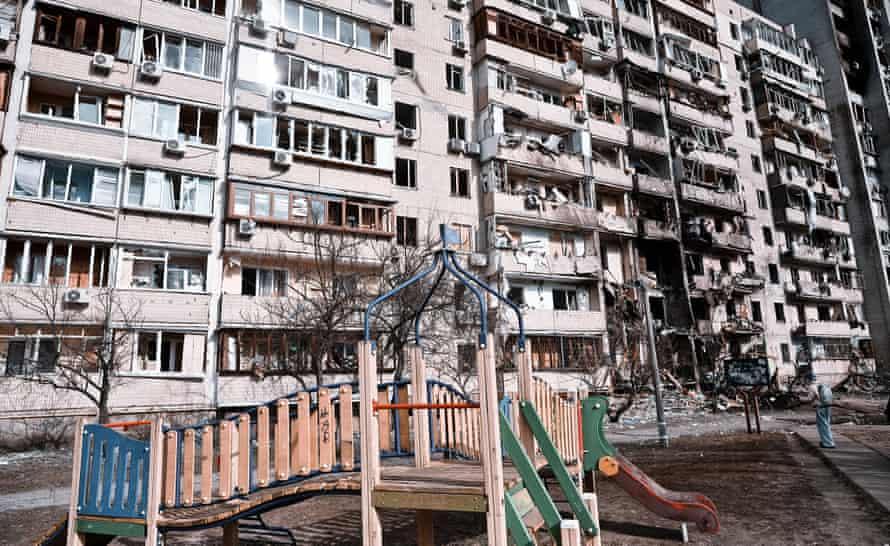 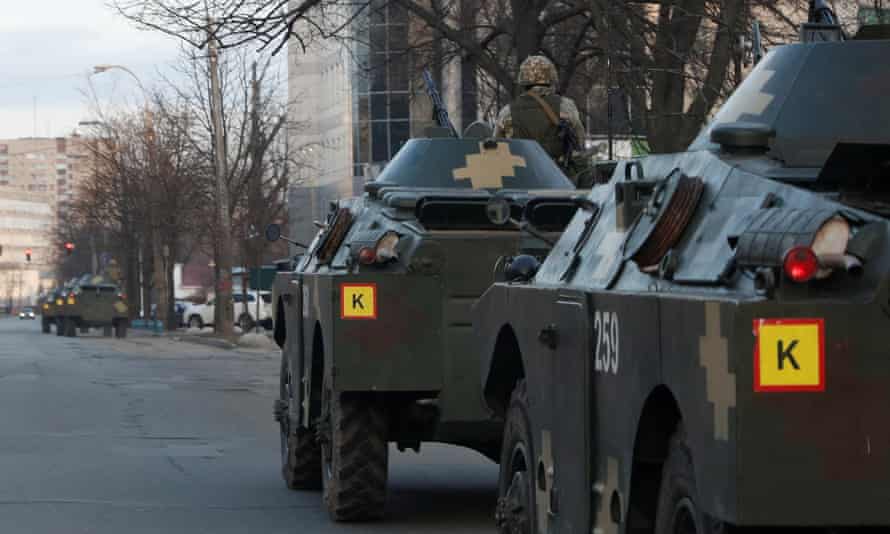 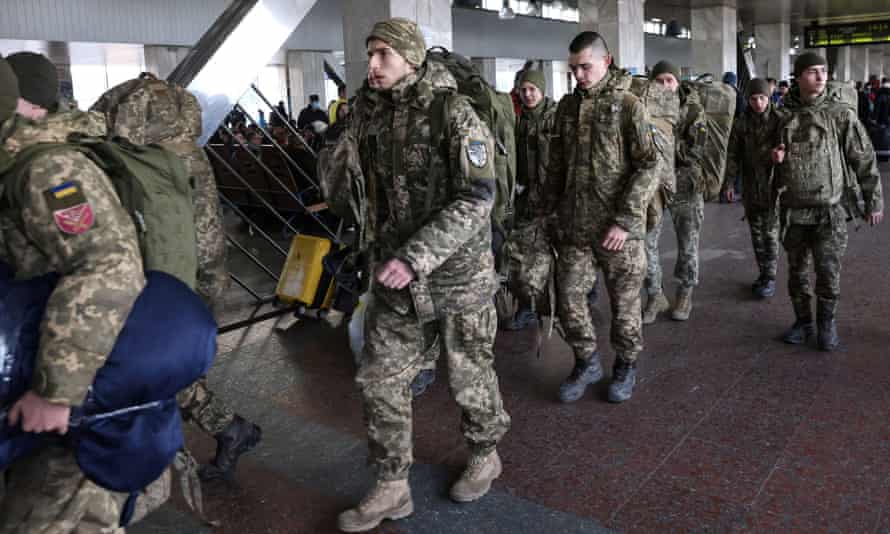 2022’s Glasses Trends Are So Chic, You’ll Want To Retire Your Contacts

Twitter aims to crack down on misinformation, including misleading posts about Ukraine

Amazon Has a Secret Hub of Flowy Summer Dresses & These...

Twitter aims to crack down on misinformation, including misleading posts about...