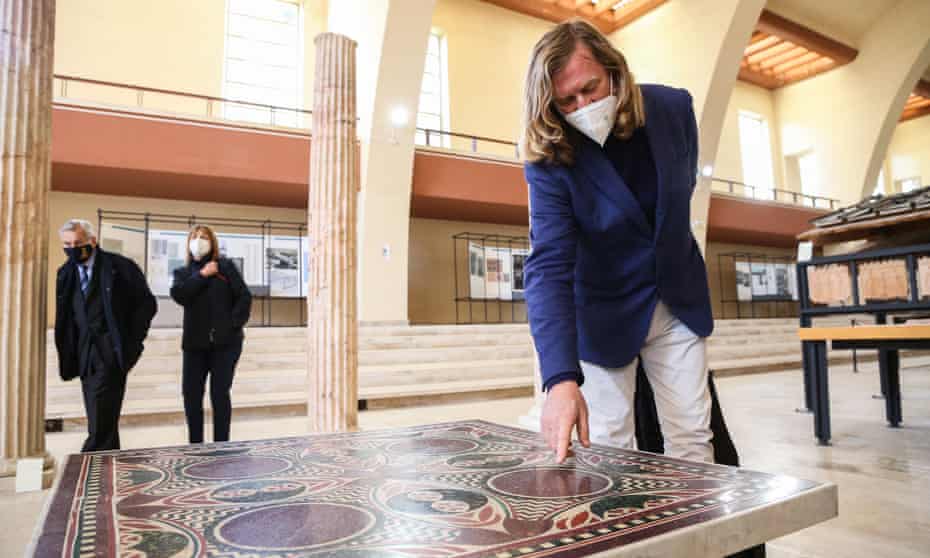 A priceless Roman mosaic that once decorated a ship used by the emperor Caligula was used for almost 50 years as a coffee table in an apartment in New York City.

Dario Del Bufalo, an Italian expert on ancient stone and marble, described how he found the mosaic in an interview with CBS’s 60 Minutes on Sunday.

In New York in 2013, Del Bufalo gave a lecture and signed copies of his book, Porphyry, about the reddish-purple rock much used by Roman emperors.

The book included a picture of the long-lost mosaic, which once formed part of a floor on one of two vast “party ships” commissioned by Caligula to float on a lake near Rome and sunk when the emperor was killed.

The mosaic and other antiquities were recovered from the lake in the 1930s and housed in a lakeside museum. In 1944, as the Nazis retreated from Italy, the ships and many other treasures were burned.

Nearly 70 years after that, as he signed copies of his book, Del Bufalo overheard a man and a woman say the woman had the mosaic they were looking at on the page.

“There was a lady with a young guy with a strange hat that came to the table,” Del Bufalo told CBS. “And he told her, ‘What a beautiful book. Oh, Helen, look, that’s your mosaic.’ And she said, ‘Yeah, that’s my mosaic.’”

Del Bufalo tracked down the young man, who confirmed that “Helen” had the mosaic in her apartment in Manhattan.

NannyPod – The ‘Uber of Childcare’

She was Helen Fioratti, an art dealer and gallery owner. According to an interview she gave the New York Times in 2017, she and her husband, an Italian journalist, bought the mosaic from an Italian noble family in the 1960s. When it arrived in New York, the couple turned it into a coffee table.

“It was an innocent purchase,” Fioratti told the Times. “It was our favorite thing and we had it for 45 years.”

The office of the Manhattan district attorney says evidence suggests the mosaic was stolen, possibly during the second world war. Returned to Italy, it went on display at the Museum of the Roman Ships in Nemi in March this year.

“I felt very sorry for her,” Del Bufalo said of Fioratti, “but I couldn’t do anything different, knowing that my museum in Nemi is missing the best part that went through the centuries, through the war, through a fire, and then through an Italian art dealer, and finally could go back to the museum.

“That’s the only thing I felt I should have done.”

Del Bufalo said he wanted to make a copy of the mosaic for Fioratti to keep in her apartment.

“I think my soul would feel a little better,” he said.

Bitcoin Turns Red, Why Bears Aim A Retest of $55K

When someone tells you money is real. Show them this video.