When Pipe was founded in 2019, its vision was to provide SaaS companies a funding alternative outside of equity or venture debt.

Specifically, the Miami-based fintech’s mission was to give SaaS companies a way to get their revenue upfront, by pairing them with investors on a marketplace that paid a discounted rate for the annual value of those contracts. Pipe describes its buy-side participants as “a vetted group of financial institutions and banks.” The goal of the platform was to offer companies with recurring revenue streams access to capital so they don’t dilute their ownership by accepting external capital or get forced to take out loans.

Over time, its executive team realized that its model could apply to other verticals. So last March, the company announced it was broadening the scope of its platform beyond strictly SaaS companies to “any company with a recurring revenue stream.” At that time, it said that could include D2C subscription companies, ISP, streaming services or telecommunications companies. Even VC fund admin and management fees were being piped on its platform, for example, according to co-founder and co-CEO Harry Hurst.

Today, Pipe is announcing that it is branching out into another new vertical while at the same time making its first acquisition in picking up London-based Purely Capital, a media and entertainment financing company.

UK-born Hurst said it was during his time spent under lockdown during the COVID-19 pandemic that he became familiar with the company’s CEO and co-founder Wayne Marc Godfrey.

“We met through one of our investors and have mutual friends,” says Hurst, who was in London, building out Pipe’s new office there. He learned that financing for independent movie production companies was crucial if they wanted to be able to move on to their next projects. Without the deep pockets of major streaming companies such as Amazon, Disney, Hulu and Netflix, these independent companies were often in limbo, waiting three to five years to get their money back and go on to their next projects.

By purchasing Purely Capital, Pipe has now created a new media and entertainment division on its platform, giving independent distributors the opportunity to trade their revenue streams in the same way a SaaS company could.

“There was $220 billion spent on streaming content in 2020, and $250 billion in 2021,” Hurst said. “That’s huge year-over-year growth. And independently produced content versus major film studios makes up over 65% of that spent, meaning it’s the majority of the market. This is a vertical that is incredibly interesting to, and a gigantic opportunity for, us.”

More funding flows into Pipe, as buzzy fintech raises $250M at a $2B valuation

Hurst declined to say how much Pipe paid for the company. Variety reported in March of 2020 that Purely Capital had secured $150 million “from a variety of institutional lenders and banks. At that time, the company had just launched its entertainment fintech receivables platform. In total, the company has originated the purchases of over 250 titles from its customers, representing over $45 million in revenues.

Godfrey has assumed the role of general manager of Pipe’s new division and his team of five will also help run the new division.

Its lean team was something that also appealed to Hurst, who runs his company with the same mentality. Since its inception, Pipe – which describes itself as the “Nasdaq for revenue” – has raised a total of $316 million. Its last raise was a $250 million round that was announced last May, valuing the company at $2 billion. It today has around 80 employees, or “plumbers,” as Pipe calls them.

“We’re very proud of the fact that we built this business with very few people relative to our scale,” Hurst said.

Currently, over 50% of the businesses trading on Pipe’s platform are non-SaaS. With this acquisition, that percentage is going to become “even larger,” Hurst said.

In 2021, Pipe issued $1.2 billion of financing to its vendors and got to “just about $1 billion” in trading volume on a run rate basis, according to Hurst. The company launched its platform to the public in 2020. 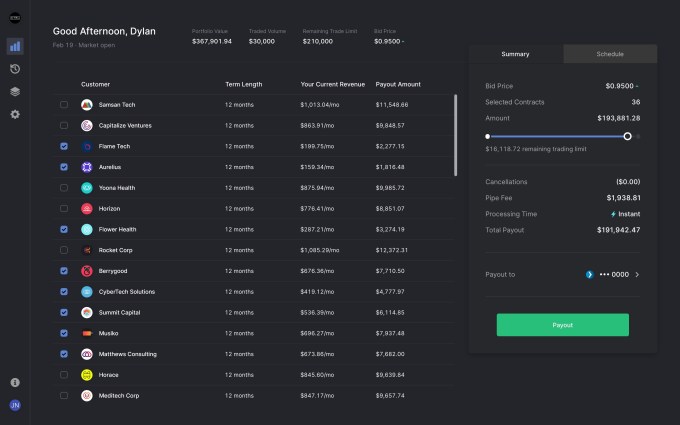 Pipe’s expansion into so many new verticals evolved “very much organically,” he said. When the company raised $50 million in a strategic round last March that included investors such as HubSpot, Okta, Slack and Shopify, it was an inflection point for the company.

“That’s when we started thinking about this long-term play,” Hurst added.

Looking ahead, he believes that Pipe’s “capital markets engine” could support “the entire revenue-as-an-asset class” globally,” he told TechCrunch. “Eventually, anyone should be able to originate onto our platform.”

Pipe’s platform assesses a customer’s key metrics by integrating with its accounting, payment processing and banking systems. It then instantly rates the performance of the business and qualifies them for a trading limit. Trading limits at the time of its last raise ranged from $50,000 for smaller early-stage and bootstrapped companies to over $100 million for late-stage and publicly traded companies, although there is no cap on how large a trading limit can be.

Of course, Pipe is not the only startup out to help SaaS startups with revenue-based financing. Arc came out of stealth in January with $150 million in debt financing and $11 million in seed funding to build what it describes as “a community of premium software companies” that gives SaaS startups a way to borrow, save and spend “all on a single tech platform.”

Is Jonathan Bailey Single? He Keeps His Romances Private

All the Nostalgic “Fresh Prince” Nods in “Bel-Air”

Shares in China fall amid strongest COVID-19 lockdown yet