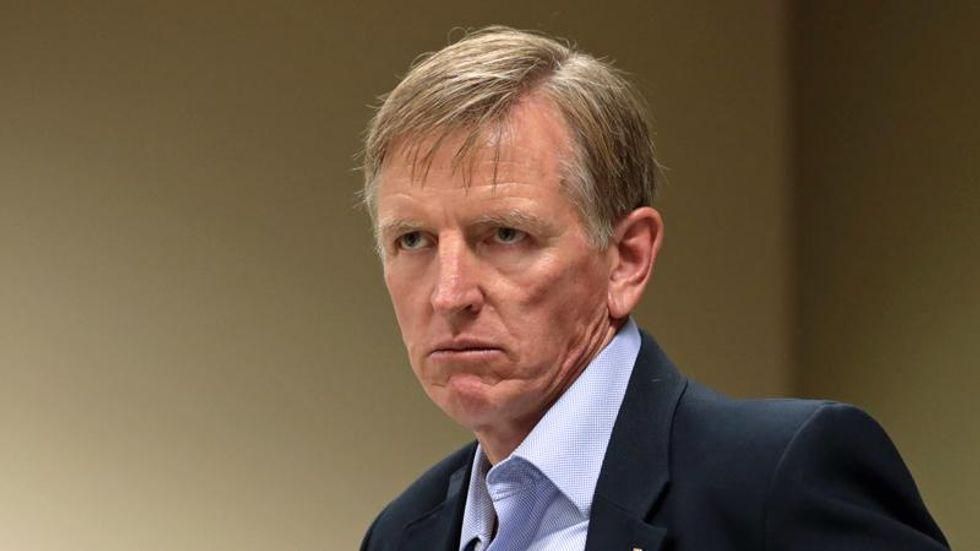 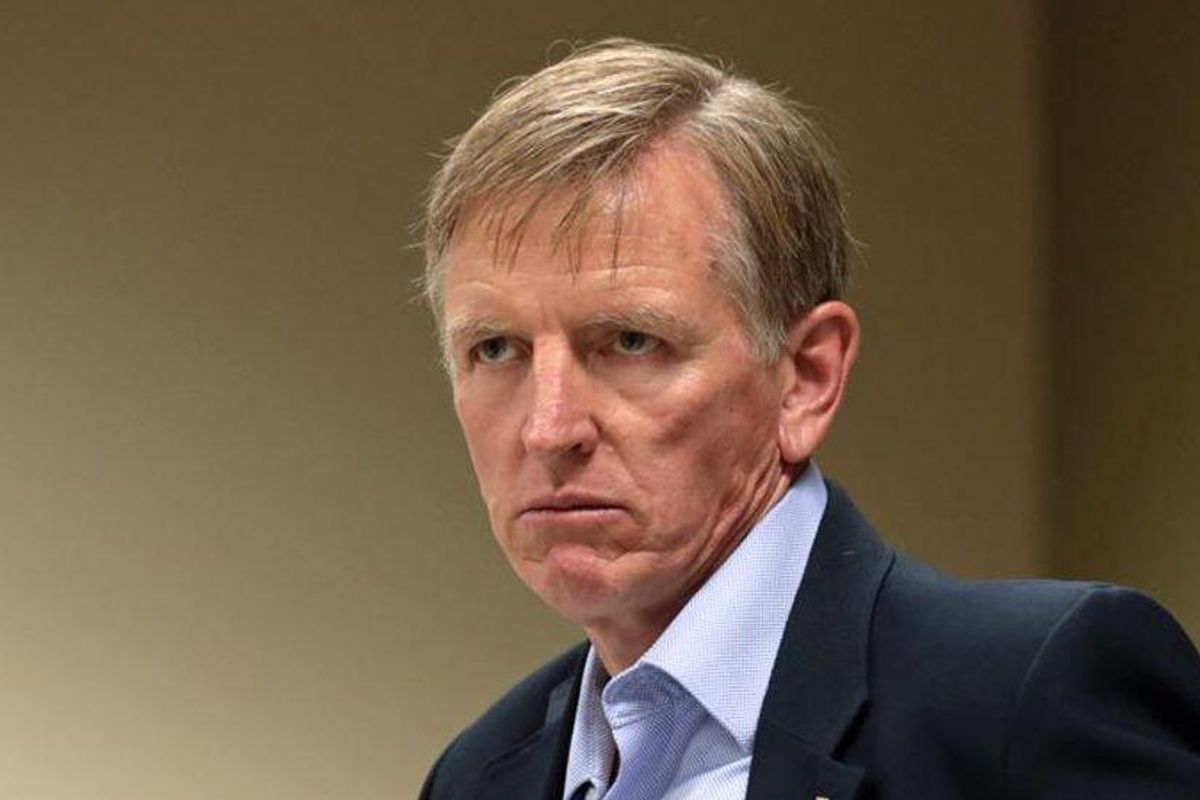 This story contains descriptions of videos and images of a racially charged nature, as do some of the links.
Paul Gosar has stoked national outrage for a Tweet depicting himself as an anime character killing and attacking prominent political figures, the latest in a string of posts from the Republican congressman that draw on far-right and racist memes and imagery.

On Tuesday, House Speaker Nancy Pelosi called for the House Ethics Committee and law enforcement to investigate “this horrific video.”

The tweet in question is a parody of the opening sequence of the popular anime series “Attack on Titan,” based on the Japanese manga series of the same name.

The series has become widely popular with western audiences and has also garnered attention from the alt-right community, which has latched onto it. Recent themes in the manga have drawn parallels with real world antisemitism and far-right politics in Japan.

The video, which Gosar posted on his official congressional Twitter account, has been viewed over 3.4 million times. Twitter has deemed that the Tweet has violated the company’s guidelines for hateful conduct. The social media company initially left it up due to “public interest,” but it was no longer visible as of Tuesday afternoon. It is unclear if Twitter removed the post or if Gosar deleted it.

GET THE MORNING HEADLINES DELIVERED TO YOUR INBOX

The video depicts Gosar as one of the main characters of the show — his face is digitally pasted over the actual character’s face — killing and attacking enemies whose faces have been replaced with those of Democratic politicians.

In one shot, Gosar can be seen killing an enemy that has U.S. Rep. Alexandria Ocasio-Cortez’s face superimposed on it. Later, he is about to attack an enemy with President Joe Biden’s face on it.

In a quote tweet on his personal account, Gosar thanked his “team” and said their creativity is “off the charts.” However, the meme appears to be a rip-off of a similar 2016 meme that cast former President Donald Trump as the hero.

An account claiming to be the creator of the video shared an unfinished video in which Gosar is seen as a character from another anime called “Death Note” in which the main character has the power to kill people by writing their names in a journal. Gosar is seen killing Biden, Osacio-Cortez and Rep. Bennie Thompson, the Mississippi Democrat who chairs the House Homeland Security Committee. Gosar’s congressional Twitter account follows the supposed “team” member account.

That same account has posted homophobic remarks, mocked LGBTQ people and said that they want to “end all immigration.”

Gosar’s office did not respond to a request for comment about the account claiming credit for the video. After an Arizona Mirror reporter followed the account, its owner blocked the reporter and made the account private.

The anime video that sparked outrage this week isn’t the first video tweet by the congressman that co-opted far-right meme culture.

Just last month, Gosar tweeted out and deleted a meme which has roots in neo-Nazi and white nationalist meme culture.

The since-deleted tweet, which was saved by the Internet Archive, begins with a cartoon image of a man looking dismayed as a number of headlines are displayed while the song “Little Dark Age” by MGMT plays.

Before the song crescendos, a buff cartoon with Gosar’s head superimposed on it appears in a doorway before the cartoon character, and a montage of Gosar is played before another photoshopped image of the congressman’s head on a muscular man is shown while a spinning “America First” logo is shown around his head.

The meme follows a format that is popular among online neo-Nazis and white nationalists who take the same song and superimpose it with images from Nazi Germany, as well as other imagery, the Arizona Mirror found.

Gosar’s office didn’t respond to requests for comment about the origins of the video or if it was created by the same “team” that created the anime video and other meme related content the congressman has shared.

Before Gosar deleted the tweet, some white nationalists and white supremacists on Twitter discussed its similarity to popular alt-right memes. One, for example, said the only difference between Gosar’s tweet and “w**nat” content was the lack of an image called a “spinsun.”

The term “w**nats” is used by the alt-right to describe people within the white nationalist movement that generally advocate for violence, antisemitism and accelerationism.

The “spinsuns” and “spinny wheel” that other Twitter users complained about referred to an image known as a sonnenrad, also known as the sunwheel or Black Sun. The Nazi party adopted the sonnenrad and it has become used by a number of modern Neo-Nazi groups as well as in violent attacks. The man who killed 51 and injured 40 more in New Zealand had a sonnenrad on his manifesto.

The most popular version of the sonnenrad used by white nationalists and white supremacists is two concentric circles with crooked rays that come out from the center circle and to the outer circle. Some sonnenrads have a swastika in the center or another norse rune.

The meme that Gosar tweeted did have a spinning “America First” logo around the congressman’s head.

Gosar has also posted other memes related to “America First,” a slogan popular among the Groyper movement and white nationalist Nicholas Fuentes.

Groypers are white nationalists and far-right activists who often troll conservatives who they feel are not extreme enough. Though loosely organized and members of many different groups, groypers are almost all followers of Fuentes.

One of the main goals of groypers is to push conservatives in a white nationalist direction, and one way they attempt to do this is to present their views in a mainstream appearance or within mainstream organizations.

Gosar spoke at an event held by Fuentes but later attempted to distance himself by saying he denounced “white racism” and said he attended the event to reach a younger voting base, according to the Washington Post.

In March, on his personal account, Gosar tweeted out a meme depicting a man soliciting a prostitute telling the man that $50 will get him whatever he wants to which the man replies “tell everyone America First is inevitable.”

The phrase “America First” was used as far back as 1896 by President William McKinley, but it became prominent in isolationist and xenophobic circles in the 1920s when the Ku Kluk Klan adopted the phrase “America First” in the 1920s. It was later promoted by American Nazi sympathizers. And David Duke, the former Grand Wizard of the KKK, would go on to use the term when describing his foreign policy platform as a U.S. Senate candidate.

“America First” has now become the rallying cry for white nationalists, like Fuentes, a young podcast host and the leader of the white nationalist group that Gosar spoke to earlier this year.

Apple will soon sell you parts and tools to fix your own iPhone or...

Ordering food on an app is easy. Delivering it could mean injury and theft