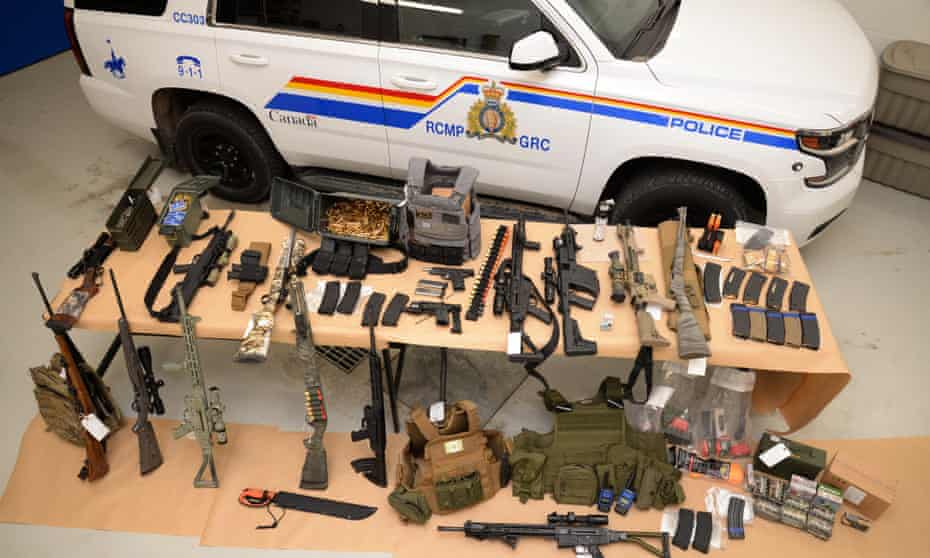 Canada’s public safety minister has warned of ties between protesters occupying the country’s capital and a group of far-right extremists who were charged earlier this week in the border town of Coutts, Alberta, over an alleged plot to kill police officers.

“Several of the individuals at Coutts have strong ties to a far-right extreme organization with leaders who are in Ottawa,” the minister, Marco Medicino, told reporters on Wednesday.

The arrests on Monday came as police cleared a blockade at the border – one of a string of such protests mounted in support of the so-called freedom convoy occupation of Ottawa.

Police seized more than a dozen handguns and rifles, a cache of ammunition and body armour. Four of the arrested men are now accused of plotting to kill a number of Royal Canadian Mounted Police officers and civilians.

Medicino’s comments are likely to further stoke fears that extremist elements are present in a nationwide spate of unrest which began as a protest against Covid-19 health mandates but has embraced a broad range of anti-government grievances.

The minister did not name the extremist group linked to the Coutts arrest, saying only “we are talking about a group that is organized, agile, knowledgeable and driven by an extremist ideology where might makes right.”

But pictures after the arrests in Coutts show that some of the tactical equipment bore a flag with a white strip running diagonally across a black background.

Extremist researchers Anti-Hate Canada said the symbol is the flag of a satirical country of Diagolon – and the emblem of a “neo-fascist” and militia movement of the same name. The group has not been linked to any violence, but the researchers say that a string of meetings where members have posed with firearms indicate that it is becoming “a militia network”.

On the organization’s channel on the secure messaging app Telegram, members have in recent days cheered on the Coutts and Ottawa protests and shared images of prime minister Justin Trudeau’s head on a pyke.

Anti-extremist researchers say that the group’s leader is a prominent far-right activist named Jeremy MacKenzie, a veteran of the war in Afghanistan who served in a Canadian Armed Forces infantry unit.

Last April, he told viewers on a livestream: “Let’s just go to Parliament Hill and burn it down.”

MacKenzie was arrested in late January on weapons charges in his home province in Nova Scotia and released awaiting trial. He lamented on his livestream that “all of my legally acquired and possessed firearms are now in the possession of the state.”

Not long after his release in late January, MacKenzie headed to Ottawa, where scores of trucks and other vehicles have blockaded the centre of the city for weeks. There is no suggestion that Mackenzie is connected to the arrests in Coutts.

After the Trudeau government invoked emergency powers in an effort to end the protest, MacKenzie hosted a livestream on Monday where he insisted: “Nobody’s going anywhere. You’re not scaring anybody. You want to fucking dance? Let’s dance.”

“I was ready to die in Afghanistan for cause I didn’t even fucking believe in or care about. I care very much about this one,” he said.

Peter Smith, a researcher with Anti-Hate Canada, said the introduction of new federal emergency powers has heightened the paranoia among the entire occupation. “What separates these extremist elements from others within the larger protest movement writ large is the emphasis on the inevitability or necessity of violence as a solution,” he said.

Protesters and protest organizers in Ottawa have repeatedly disavowed violence and insisted that their protest is about peaceful civil disobedience.

But police and emergency response sources in Ottawa say the authorities are concerned that some protestors in the city may possess firearms, and some elements of the movement appear to see the occupation as the possible trigger for broader unrest.

“What we’re beginning to see emerge now are the hallmarks of a sophisticated and capable organization of a small number of individuals, but with a steel resolve, driven by an extreme ideology that would seek to create to overthrow the existing government,” Medicino said.

The anti-vaccine group Hold Fast, which is present in Ottawa, posted to Facebook: “I smell civil war coming to Canada.” On Zello, the semi-official digital radio app of the occupiers, one prolific user commented: “I think we’ve got to lynch more than Trudeau. I think the peaceful protest is going to have to start changing.”

The leader of Canada First, a far-right and antisemitic group that has been visible at the occupation, recently warned that “Trudeau cannot stop what is inevitable.”