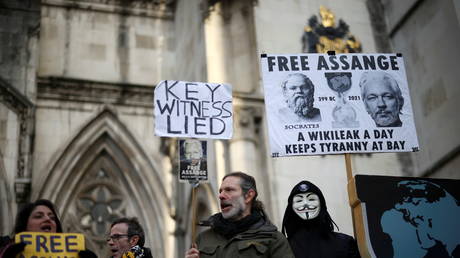 Australian opposition lawmakers have urged Prime Minister Scott Morrison to “end [the] lunacy” over Julian Assange’s imprisonment on alleged espionage charges and demand the US and UK release the WikiLeaks founder.

After a British court ruled on Friday that Assange could be extradited to the US, parliamentarians have called on Canberra, and Morrison in particular, to intervene during what Australian Greens leader Adam Bandt described to The Guardian as a “critical moment in the fight against suppression of press freedom.”

Assange’s persecution and our government’s inaction are chilling, and should worry everyone who cares about a free press or thinks that governments should protect their citizens.

Australia’s Department of Foreign Affairs and Trade (DFAT) said the country was not a party to the case and would respect the British legal process. An unnamed DFAT spokesperson told the Australian Associated Press that the government had “raised the situation” with the US and UK regarding its “expectations of due process, humane and fair treatment, access to proper medical and other care, and access to [Assange’s] legal team.”

But Bandt told The Guardian that the government was “[sitting] on its hands and [doing] nothing” while an Australian citizen was “being prosecuted for publishing details of war crimes.”

The US wants Assange, 50, extradited to stand trial over an alleged conspiracy to obtain and publish classified information following WikiLeaks’ release of hundreds of thousands of leaked documents about the country’s wars in Afghanistan and Iraq. If convicted, he faces a 175-year prison sentence.

Meanwhile, Independent MP Andrew Wilkie described Assange as a “hero” and called on Morrison to “end this lunacy” since “journalism is not a crime.” He criticized the UK for being a “lackey of the US” and blasted Canberra as being “delighted to go along for the ride.”

Tweeting that a “political response” was needed to get “justice” for Assange, Greens senator Janet Rice urged Foreign Minister Marise Payne to tell her US counterparts to “drop these absurd charges and end Assange’s torture.”

Julian #Assange ‘s prosecution has always been political. It’s going to need a political response from our government to get justice for him.
Foreign Minister @MarisePayne must urgently speak to the US and tell them to drop these absurd charges and end Assange’s torture.

Assange’s lawyers have announced they will appeal the ruling, with the legal fight likely to head to the UK’s supreme court. But Labor Party spokeswoman Penny Wong told The Guardian that the case had “dragged on for too long” and pressed Morrison to “bring this matter to a close.”

Tesla is reportedly testing the payment option of cryptocurrency Dogecoin.