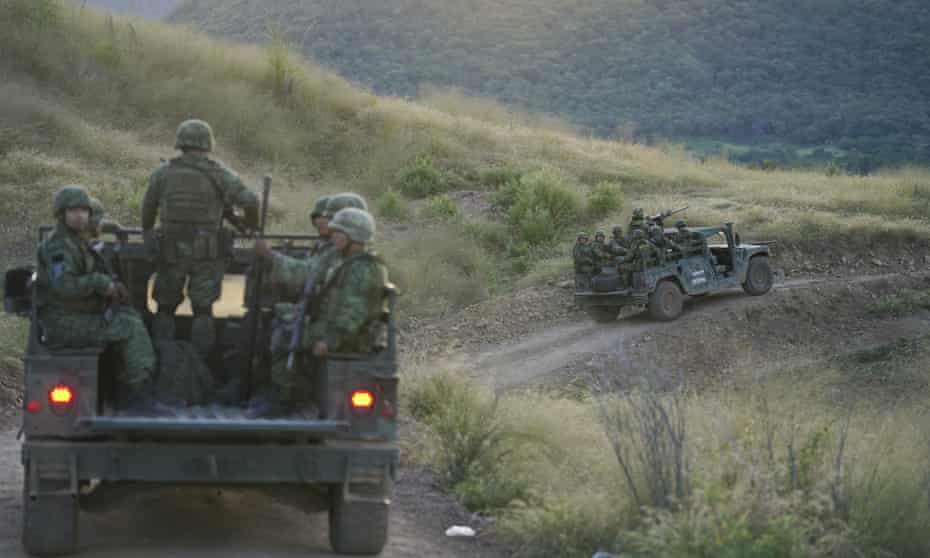 A small squad of soldiers with about a half-dozen trucks and sandbag emplacements stands guard on a rural highway in western Mexico. In one direction, almost within earshot, one drug cartel operates a roadblock extorting farmers. In the other direction, a rival cartel carries out armed patrols in trucks bearing its initials.

The Mexican army has largely stopped fighting drug cartels here, instead soldiers guard the dividing lines between gang territories so they won’t invade each other’s turf – and turn a blind eye to the cartels’ illegal activities just a few hundred yards away.

At the first roadblock, set up by the Viagras gang that has long dominated the state of Michoacán, a truck stands parked across the highway and stacked sandbags protect cartel gunmen.

Every few hours, the gunmen roll back the truck to allow farmers through, but only let through the drivers once they have paid a “toll”.

Between them stand the soldiers, doing very little at all.

The cartel based in Jalisco state is invading neighboring Michoacán, causing thousands of farmers to flee, with some seeking asylum in the United States.

The federal and state governments did not respond to repeated requests for comment on the strategy.

Michoacán’s seaport of Lázaro Cárdenas is valued by the cartels as an entry point for precursor chemicals from China used to make methamphetamine and fentanyl. Its avocado orchards and iron ore mines are also a prime target for extorsion by the Viagras.

Jalisco’s leader, Nemesio “El Mencho” Oseguera, wants to take over all this, as well as regain control of his home town; he was born in the Michoacán hamlet of Chila.

“There is something like an increasingly explicit attempt to administer the conflict,” Hope said. “They [soldiers] are not there to disarm the two sides, but rather to prevent the conflict from spreading. The problem is that we don’t know where the army draws the line, what they are willing to accept.”

In the mountain township of Aguililla, now dominated by Jalisco, almost 200 soldiers have been barricaded into their command post by angry residents for four months.

The army has been flying in food for the troops by helicopter since townspeople used construction vehicles to blockade the army barracks in late June. Across Mexico soldiers have been taken hostage by townspeople because they know troops won’t even defend themselves under President Andrés Manuel López Obrador’s policy of “hugs, not bullets”.

Aguililla residents say they won’t let the soldiers out of their barracks until the army does its job of clearing the Viagra roadblocks that make things like medical care, food, fuel, electrical or telephone repairs impossible or expensive to get.

“The most shameful thing is the absence of the government, which has become simply a spectator in a war that has left so many dead, so much destruction,” said the local priest in Aguililla, the Rev Gilberto Vergara.

“[The army] just stands there watching, and …when it can’t do anything else or when one side appears to be winning, it will act,” Vergara said. “But that is not the rule of law.”

In September, after a Jalisco cartel offensive against the nearby town of Tepalcatepec left five local vigilantes decapitated, the army sent in helicopters, reportedly armed with revolving-barrel machine guns that can fire thousands of rounds per minute.

Since then, the army has taken up positions around Tepalcatepec, but has done the same thing as on the road to Aguililla: nothing.

“Why doesn’t the army advance? Why don’t they send in the helicopters again?” said a farmer in the hamlet of Taixtán, near Tepalcatepec, as he motioned down a dirt road in the direction of sorghum fields he cannot reach to harvest because Jalisco cartel snipers posted on a nearby hill.

“Since they [soldiers] came, they haven’t fired a shot,” said the farmer, whose “self-defense” squad regularly exchanges fire with Jalisco. The farmer, like most others interviewed, refused to give his full name.

Most of the farmers in Tepalcatepec feel they have been left alone to fight off an invasion.

Nobody asks too much about where the Tepalcatepec vigilantes got their bulletproof cars and AR-15 rifles. There are rumors that the Sinaloa cartel has sent help, as part of that cartel’s nationwide war with arch-rival Jalisco.

López Obrador has been seeking to avoid conflict since 2019, when he ordered the release of Ovidio Guzmán, a son of imprisoned kingpin Joaquín “El Chapo” Guzmán, to avoid bloodshed after Sinaloa gunmen paralyzed the northern city of Culiacán.

But the government’s strategy of avoiding conflict has forced inhabitants to choose sides.

“If the government is absent, then the cartels take over. It’s not that we choose one, that we want this one or that one. There is a war between them, and they divide up the territory,” said Vergara. “If they are here, we have to live with them. That doesn’t make us accomplices, or applaud them or say one is better than another.” 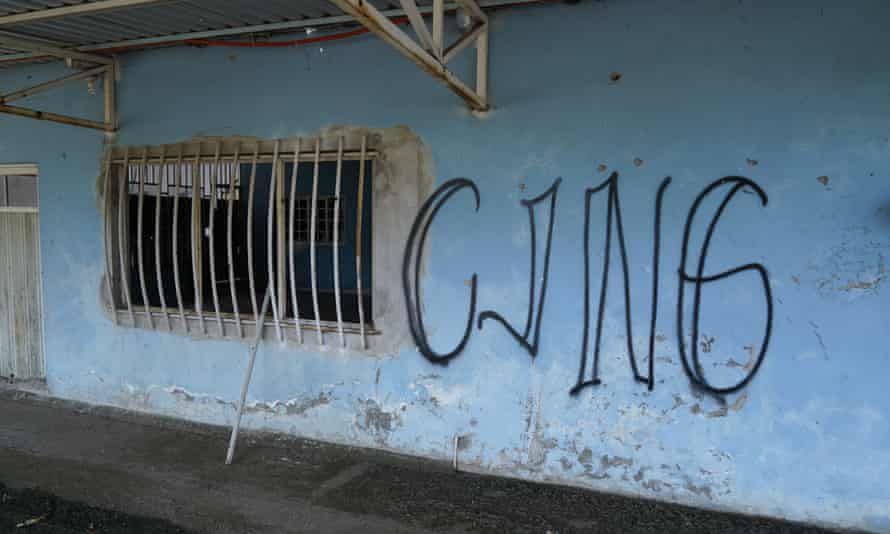 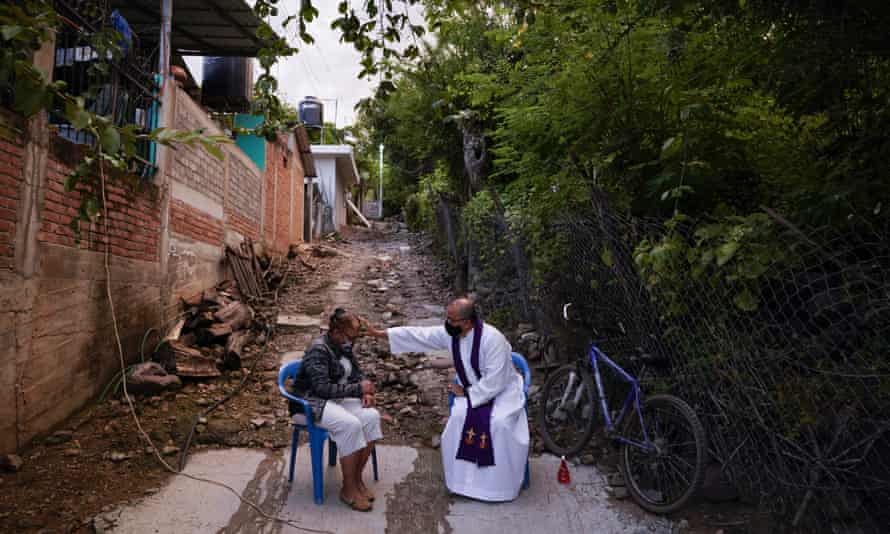 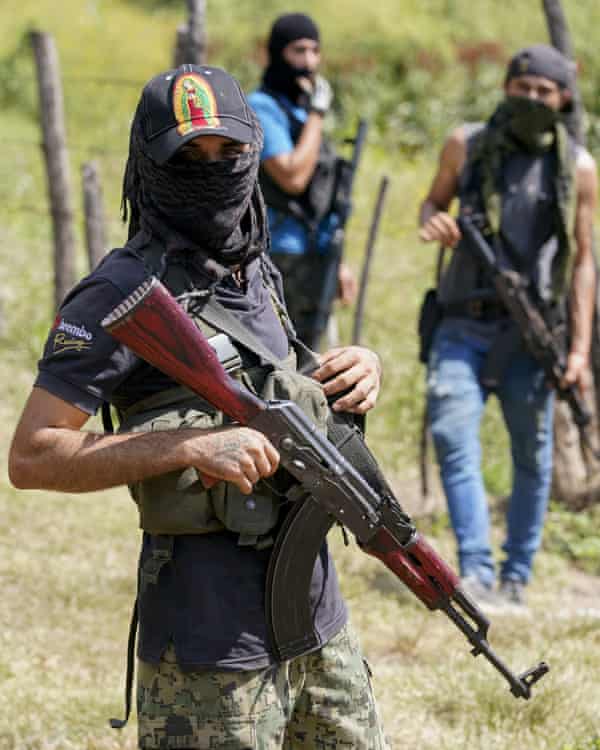 Bitcoin Mining At Home: Trend To Watch In 2022