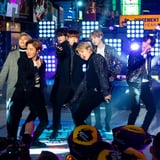 When the 2021 American Music Awards air live from Los Angeles on Nov. 21, plenty of stars will be in attendance now that COVID-19 infection rates are falling, thanks to the US’s nearly 60 percent vaccination rate, allowing Hollywood to return to some semblance of normal. Cardi B will take the stage as host and help hand out awards to some of music’s biggest stars. One act that many fans are hoping to see at the show is, of course, BTS. The K-pop supergroup is up for three awards at this year’s show – artist of the year, favorite pop duo or group, and favorite pop song for “Butter” – but the question remains: Will BTS attend the American Music Awards in person? More importantly, will they perform? Good news, ARMY! The answer to both those questions is yes!

The bad news? The band was set to perform the remix of their hit single “Butter” alongside Megan Thee Stallion on the AMAs stage for the first time – in person! But as of Nov. 20, Meg announced via Twitter that she won’t be joining BTS due to a personal matter. “Hotties I was so excited to go to the @AMAs and perform with @BTS_official, but due to an unexpected personal matter, I can no longer attend 😭😭,” she wrote. “I’m so sad! I really can’t wait to hit the stage with my guys and perform #BTS_Butter real soon!💜”

Hotties I was so excited to go to the @AMAs and perform with @BTS_official, but due to an unexpected personal matter, I can no longer attend 😭😭I’m so sad! I really can’t wait to hit the stage with my guys and perform #BTS_Butter real soon!💜

A couple hours later, the AMAs Twitter account confirmed that BTS will still perform twice, including once with Coldplay. So it looks like BTS will extend their vibrant history with the American Music Awards in 2021. BTS made their US TV debut performing “DNA” at the 2017 AMAs. Since then, they’ve been nominated for nine awards, and of the six nominations before 2021, they’ve won every last one. This year is the first time they’ve been nominated for a main award – artist of the year (AotY) – which is arguably the biggest award of the night. BTS has already made history as the first K-pop artist ever to be nominated for AotY at the AMAs, but it would be even more historical if they manage to take the award home.

Since the start of COVID-19 in March 2020, BTS has attended award shows virtually due to COVID-19 safety measures that restricted their ability to travel internationally like they did pre-COVID. It hasn’t stopped them from performing, though. They’ve performed virtually from South Korea at the 2020 American Music Awards, the 2021 Grammys, and the 2021 Billboard Music Awards.

The American Music Awards will mark their first in-person award show appearance since they attended the Grammy Awards in person in February 2020. RM, Jin, Suga, J-Hope, Jimin, V, and Jungkook were able to travel to the US for the first time in over a year in September 2021 to take part in the United Nations General Assembly in New York. Now they’ve scheduled their Permission to Dance concerts – four shows at SoFi Stadium in LA – for Nov. 27, Nov 28, Dec. 1, and Dec. 2. Looks like they were able to add the American Music Awards to their schedule because it’s just a week before the stadium shows. ARMYs are excited to see them pick up some (and hopefully all) awards before their LA shows.

We’ll have to wait a bit longer to see BTS hit the stage with Megan Thee Stallion. The AMAs air on Nov. 21 on ABC.

Do I need to wear a face mask at beauty appointments?

19 Fashion-Forward Gifts To Give Your Most Stylish Friend