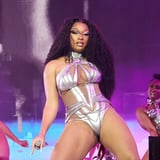 Megan Thee Stallion has new music on the way, and fans can hardly wait. On April 17, the Houston hottie graced the stage during the first weekend of Coachella and debuted a brief snippet of one of her new tracks, which she described as a “very motherf*cking personal” song dedicated “to whom it may the f*ck concern.”

“Dear f*ck n***a, still can’t believe I used to f*ck wit’ ya / poppin’ Plan B’s ’cause I ain’t planned to be stuck wit’ ya,” she raps in the song. “Ladies, love yourself, ’cause this sh*t could get ugly / That’s why it’s, ‘F*ck n***as, get money!'” Fans in the crowd and on social media went nuts over the gritty track, which samples Jodeci and Wu-Tang Clan’s “Freek’n You Remix.”

Related:
RBI regulated markets to start trading at 9 am from Apr 18

See All the Celebrities at This Year’s Coachella

Following her Coachella performance, Megan Thee Stallion shared a video of her rapping the song during her Sunday set via Instagram, captioning it, “I performed a snippet of my unreleased song at Coachella last night 🔥🔥🔥 I see y’all saying y’all want it … maybe I should just gone headdd release this #hottiechella.”

On April 18, a fan tweeted at the rapper asking her to drop the new song, to which Megan responded, “Friday.” She announced the song’s official title two days later via social media. “PLAN B OUT FRIDAY presave it NOW,” she tweeted, along with the song’s cover art.

In an interview with POPSUGAR, Megan previously teased that she’s been “working hard in the studio” and had some new songs ready to debut at her festival appearances. Clearly, she kept her word. Now that we have an official release date for her new track, the countdown is on.

4-Year-Old Boy Claims He Was an Angel, Makes Mom Believe He Is an Old...

Her brother was killed in Ukraine. She says his family is still waiting for...