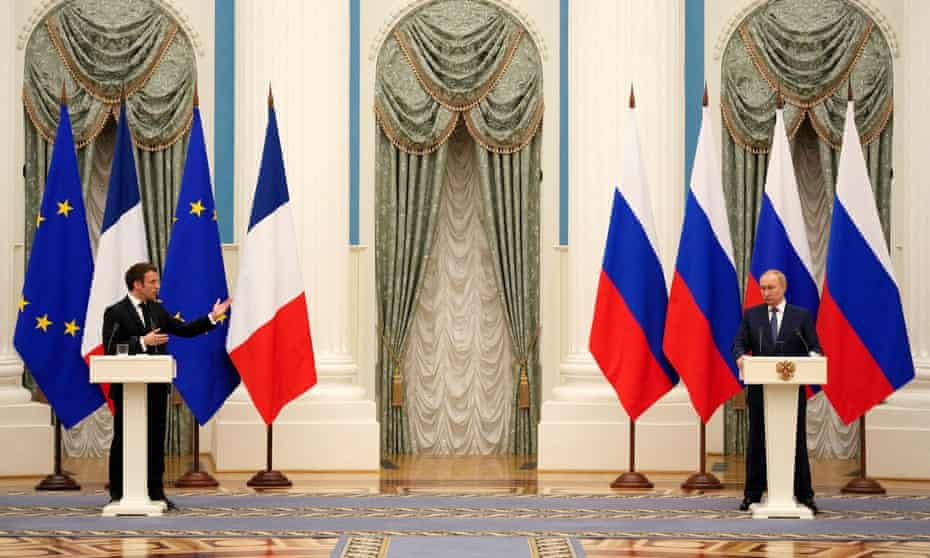 The French president, Emmanuel Macron, has launched a desperate last-minute effort to try to avoid Russia invading Ukraine, amid further US warnings that war is imminent.

Macron claimed he had persuaded Vladimir Putin to endorse urgent talks aimed at securing a ceasefire in the disputed east of Ukraine. They also agreed, during a 105-minute telephone call on Sunday, to hold discussions in the hope of organising a leaders’ summit to review the future security architecture of Europe, Macron said.

But hours after his announcement, US news networks claimed US intelligence sources were briefing that Russian troops had received orders to proceed with the invasion of Ukraine. More than 150,000 Russian troops are massed on the borders, and on Sunday Belarus’s defence ministry said Russian forces sent there for military exercises will remain in the country indefinitely.

The US secretary of state, Antony Blinken, said: “Everything we are seeing suggests that this is dead serious, that we are on the brink of an invasion.”

He added: “Until the tanks are actually rolling, and the planes are flying, we will use every opportunity and every minute we have to see if diplomacy can still dissuade President Putin from carrying this forward.”

Earlier, the British prime minister, Boris Johnson, warned that Russia plans to launch the biggest war in Europe since 1945 by attacking Ukraine in a “bloody and protracted conflict”. He said the west would use “all the pressure we can bring” to “make sure that this venture does not succeed”.

The chink of diplomatic light came after Putin spoke on the phone with Macron, his favoured western interlocutor, on Sunday morning, and the outcome, broadly confirmed by the Kremlin, suggests Putin might be willing to step back from the brink of a full invasion of Ukraine to allow renewed diplomatic discussions. If he is not, he is instead involved in an elaborate deceit of the French.

Under the plan, the French foreign minister, Jean-Yves Le Drian, will meet his Russian counterpart, Sergei Lavrov, in the coming days to work on a possible summit at the highest level with Russia, Ukraine and allies, the Élysée said.

The two leaders also agreed to resume work on a separate meeting “within the framework of the Normandy format”, meaning the participants will be Russia, Ukraine, France and Germany, Macron’s office and the Kremlin said.

Putin and Macron would also work “intensively” to allow the Trilateral Contact Group – which includes Ukraine, Russia and the Organization for Security and Co-operation in Europe – to meet “in the next few hours” in an effort to secure a ceasefire in eastern Ukraine where government troops and pro-Russian separatists are facing each other, according to the Elysée statement.

It is too early to say if Macron has pulled off a last-minute diplomatic coup, or if he will have the full support for his initiative from Washington and London. So far, most of the French president’s diplomatic moves have been coordinated with the White House.

Gérard Araud, a former French diplomat, defended Macron, saying: “he is today the only western leader actively engaged in finding a peaceful way out of the current crisis. He does know that he may fail, and probably will, but he is right to try, and deserves our support and understanding.”

The Élysée statement said “intense diplomatic work will take place in the coming days”, including several consultations in the French capital, adding that the two leaders also agreed on “the need to favour a diplomatic solution to the ongoing crisis and to do everything to achieve one”.

An Élysée official confirmed further talks between the two leaders were scheduled, but said Putin and Macron clearly had “different interpretations” of what was happening in the Donbas region and who was to blame, with the French president arguing that pro-Russian separatists were responsible, and the Russian leader insisting it was Ukrainian forces.

The Élysée official said Macron would be talking “in the next few hours” to the German chancellor, Olaf Scholz, and the US president, Joe Biden. Further calls were likely to be placed to Johnson, the Italian prime minister, Mario Draghi, and other close partners, the official said.

They added that Putin had reiterated that Russia “intends to withdraw its troops” from Belarus once ongoing exercises were complete. “All this will have to be verified, and that could take some time,” the official said, noting that statements by the Belarus authorities “do not appear to match Putin’s words”.

The Belarusian defence minister said Russia and Belarus were extending military drills that were due to end on Sunday, in a step that further intensifies pressure on Ukraine.

The Kremlin said that in the phone call, Putin had expressed serious concern over the sharp deterioration of the situation on the line of contact in Donbas.

The Russian statement added: “Taking into account the acuteness of the current state of affairs, the presidents considered it expedient to intensify the search for solutions through diplomatic means through the foreign ministries and political advisers to the leaders of the countries participating in the Normandy format. These contacts are designed to help restore the ceasefire and ensure progress in resolving the conflict around Donbas.”

The Kremlin insisted Putin was not withdrawing any of his wider demands, saying he “reiterated the need for the United States and Nato to take Russian demands for security guarantees seriously and respond to them concretely and to the point”. It made no reference to Macron’s proposed leaders’ summit.

The statement added that Putin blamed the escalation in Donbas on the provocations of the Ukrainian security forces, and that he complained of the continuing provision of modern weapons and ammunition to Ukraine by Nato countries, “which is pushing Kyiv towards a military solution to the so-called Donbas problem”.

Violence in eastern Ukraine has increased in recent days as Ukraine and the two regions held by the rebels each accused the other of escalation. Russia said on Saturday at least two shells fired from a government-held part of eastern Ukraine landed across the border, but the Ukrainian foreign minister, Dmytro Kuleba, dismissed the claim as “a fake statement”.

For years, sporadic violence has broken out along the line separating Ukrainian forces from the Russia-backed rebels, but there are fears that the recent increase in shelling and bombing could set off a full-scale war.

The US and many European countries have alleged for months that Russia is trying to create pretexts to invade.

Rupee appreciates 17 paise to 77.17 against US dollar in early trade

Man Had to Choose between Saving Wife or Baby Daughter’s Life: ‘It Was Going...