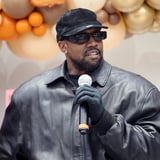 Image Source: Getty / David Livingston
Following the August release of “Donda,” Kanye West is gearing up to drop more new music. On Jan. 27, the 44-year-old rapper announced that “Donda 2″ will be dropping on Feb. 22. The album will be executive produced by Future, but West has yet to reveal the tracklist or any upcoming collaborations.

West did, however, share on Feb. 17 that “Donda 2” is getting quite the unique release. A device called the Stem Player is being sold in conjunction with the album to allow viewers to listen. “‘Donda 2’ will only be available on my own platform, the Stem Player. Not on Apple Amazon Spotify or YouTube,” West shared on Instagram, explaining, “Today artists get just 12% of the money the industry makes. It’s time to free music from this oppressive system. It’s time to take control and build our own. Go to stemplayer.com now to order.”

On the website, it states that the device retails for $200, has 8GB of storage, bluetooth compatability, lighting features, a speaker, a headphone jack, and supports all forms of audio. Uniquely, the Stem Player allows its buyers to do their own editing by enabling you to control vocals, drums, bass, and samples; isolate parts; add effects; audio mix; and save and download your mixes.

Ahead of the “Donda 2” release, Netflix released his three-part documentary, “Jeen-Yuhs: A Kanye Trilogy,” which debuted at this year’s Sundance Film Festival. Directed by West’s frequent collaborators Coodie Simmons and Chike Ozah, the project chronicles the rapper’s early days through video footage filmed over the course of 20 years. West was involved in the making of the project, but he recently demanded that he get the final edit and approval of the documentary before its Feb. 16 release. “I must get final edit and approval on this doc before it releases on Netflix,” he wrote on Instagram. “Open the edit room immediately so I can be in charge of my own image. Thank you in advance 😊.” As of now, it’s unclear if West was allowed back into the editing room.

He later gave a written stamp of approval. “Never give up on your dreams and follow your Jeen-Yuhs! Praise GOD!” the rapper wrote in a since-deleted Instagram post on Feb. 16.

All the Celeb Cameos in Kanye West’s “Jeen-Yuhs” Docuseries

Careful with Your Discord Server – It May Not Be as Secure as You...

Here’s ‘what happened’: Twitter CEO reveals why Elon Musk is off the company’s board