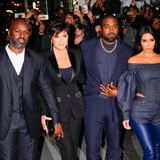 Kanye West continues to take shots at his former associates. In a now-deleted Instagram post, the 22-time Grammy-winning rapper shared a scathing message about his mother-in-law Kris Jenner‘s longtime boyfriend, Corey Gamble. “God has a plan to remove the godless Corey needed to never be here anyway,” he wrote on Saturday. “And I think he’s a nice person not a great person a nice person who used to be around Puff’s family then got around Justin Bieber and then when Kris got divorced he slid in.”

West also claims that Gamble once told Kim Kardashian what music to listen to, which prompted him to remove the 41-year-old talent manager from his daughter’s birthday party. “We still never met his family,” he continued. “And I guess we never will. He got my wife linked with the liberals in a deep way. That was his Job. For some reason I always felt he worked for DuPont or some organization in that pedigree.”

Cameron Diaz Has Turned Down ‘Numerous Offers’ Since She Quit Acting

Hours prior to airing his grievances with Gamble, the father of four implied that Jenner’s beau cheated on her with a woman at a Miami nightclub. He shared a screen grab from an unauthorized video of a man who was alleged to be Gamble kissing another woman. West wrapped up his Feb. 19 Instagram post by singing Jenner’s praises, writing, “I love Kris. This woman is a hero and she’s done what she’s had to do to protect her family and make sure they prosper even if it meant telling everyone not to listen to me I respect her grind her hustle and her mind Kris is one of the best to ever do it.”

Jenner and Gamble first met in 2014 at fashion designer Riccardo Tisci’s 40th birthday party in Ibiza, Spain. Neither Jenner nor Gamble have publicly addressed the allegations.