ISIS has opened up a new front as fanatics try to build a new Caliphate in Africa – with at least three people killed in a double suicide bombing today.

Hundreds were forced to rush for cover as cars burst into flames in Kampala, the capital of Uganda, in the midst of a wave of blast attacks.

Three people have been killed in a double suicide bombing in Kampala, Uganda[/caption]

It comes amid a spate of attacks in Africa[/caption]

At least 33 people were being treated in hospital, including five in critical condition, police spokesperson Fred Enanga said.

The death toll including the three bombers was six, Enanga said. A diplomat told Reuters two police officers were killed.

Enanga blamed the blasts, which forced an evacuation of parliament, on the Allied Democratic Forces – an extremist group that is affiliated to the Islamic State group.

The attacks in the Ugandan capital shocked a nation known as a bulwark against violent Islamist militants in East Africa, and whose leader has spent years cultivating Western security support.

It comes as it’s feared ISIS is “evolving into a new beast” in order to strike the West.


I regret my daughter’s name, it’s skanky and embarrassing when I say it out loud

Wondering if Zazie Beetz Was Really Singing in The Harder They Fall? Here’s the Deal

The terror network already has branches operating in Tunisia, Libya and Mozambique, and across the Sahel region including Mali and Chad.

Chad has problems with jihadist violence in the Lake Chad region that borders Niger, Nigeria and Cameroon, while Somalia, Mozambique and the Democratic Republic of Congo are also battling Islamist extremists.

There are concerns a terror wave could hit the UK in the wake of the collapse of Afghanistan, with recent attacks across Africa a chilling sign of the jihadists’ growing confidence of victory in Africa as chaos unfolds in Kabul under the ruthless rule of the Taliban.

Ashok Swain, professor of peace and conflict research at Sweden’s Uppsala University, previously told The Sun Online: “The Taliban victory in Afghanistan has given new momentum to the Islamist terror groups worldwide – including al-Qaeda and ISIS.

“The Islamist terror groups are gaining more and more strength gradually in Africa.

“War is coming to an end in Afghanistan and Syria, so there will be a shift of the focus of the Islamist terror groups.

“The climate crisis and democratic decline in Africa have made the situation much worse.”

Today, two explosions were reported just three minutes apart in Kampala – the first near the central police station and the second very close to parliament – sending bloodied office workers rushing for cover over shards of broken glass as a plume of white smoke rose above downtown.

A suicide bomber wearing a backpack detonated near the checkpoint at the police station, killing two, Enanga said.

Police released security video footage of the precise moments the bombers detonated their devices in the streets, sending clouds of white smoke billowing in the air.

Peter Olupot, a bank guard close to parliament, told of the horror scenes.

“A booming sound like that from a big gun went off. The ground shook, my ears nearly went deaf,” the 28-year-old said.

“I saw a vehicle on fire and everyone was running and panicking. I saw a boda boda (motorcycle) man – his head was smashed.”

Anti-terrorism police caught another potential suicide bomber and found a device at his home, Enanga said.

Last month, Islamic State claimed its first blast in Uganda – an attack on a police station in Kampala which killed no one.

Days later, it later said a “security detachment” in “Central Africa Province” bombed a restaurant. Police said the device killed a waitress and wounded three others, and linked it to the ADF, which has pledged allegiance to Islamic State.

Also last month, Ugandan police said a suicide bomber had blown up a bus, killing only himself. His affiliation was unclear.

Meanwhile in October, two children were killed in a Ugandan village when they were handed a device that looked like a jackfruit.

In April, dozens of innocent people, including foreign oil workers, were ruthlessly killed when ISIS terrorists went on the rampage in the key industrial town of Palma, in Mozambique.

The UN said “the absence of significant counter-terrorist measures” in the country have transformed the ISIS affiliate in central Africa into a “major threat”.

Africa is now “the region most affected by terrorism” and has the “largest numbers of casualties”.

The Pentagon has warned Islamic State is taking over swathes of Africa like it did in Syria and Iraq with “staggeringly brutal” tactics.

Enanga, the police spokesman, said Tuesday’s attacks bore the hallmarks of the work of this group.

At least 150 planned attacks have recently been defused, he said, describing AED as a “domestic terror group eager to carry out more attacks”.

The Allied Democratic Forces has long been opposed to the rule of longtime President Yoweri Museveni, a US security ally who was the first African leader to deploy peacekeepers in Somalia to protect the federal government from the extremist group al-Shaba 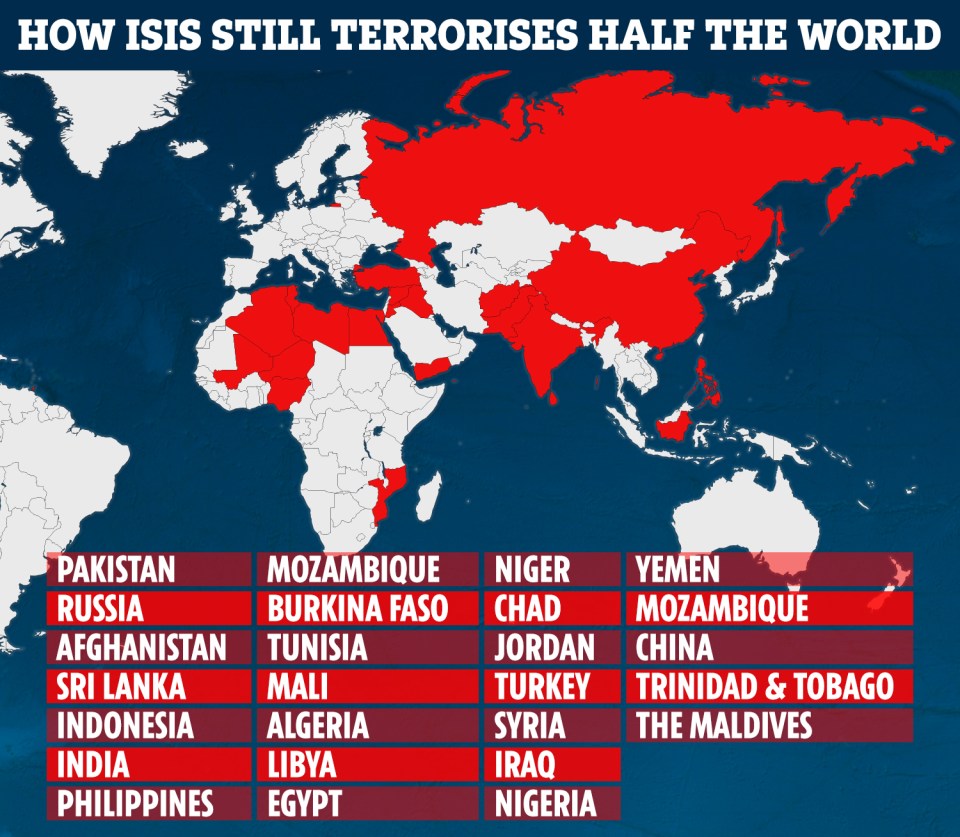 Dame Joan Collins is ‘lucky’ to be getting older in good health with ‘great’...

Rupee gains 7 paise to close at 74.45 against US dollar