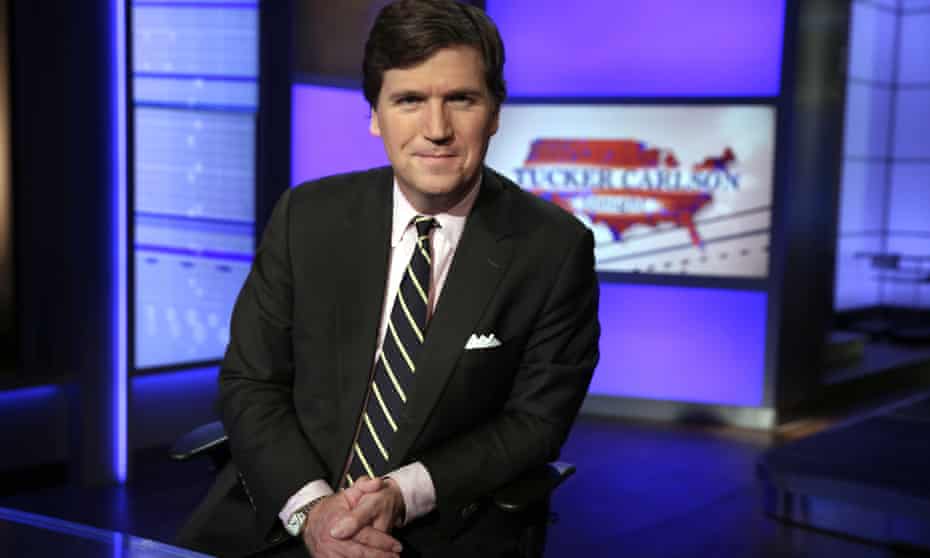 Kyle Rittenhouse, the teenager acquitted of murdering two men during anti-racism protests, is set to appear next week on Fox News’s Tucker Carlson show amid fears that the not guilty verdict in the Kenosha killings might encourage militia violence.

Rittenhouse’s shooting of three people, including two he killed, during demonstrations in the Wisconsin city split the US. For some it made him a vigilante out to make trouble while for others he was a gun-toting hero defending property from a mob.

Rittenhouse became a heroic figure for conservatives during his trial as many rightwing figures raised money for his legal defense. His coming interview by Carlson – one of Fox’s most controversial and extreme hosts – is likely to cement that popularity. The Monday night sit down is already being heavily promoted by the conservative channel.

Carlson has risen to prominence as the most influential media figure for conservatives, even amid numerous controversies.

Carlson has advocated for multiple baseless conspiracy theories on his show and been condemned for dog-whistling racism. The Fox News host is releasing a series that argues that the 6 January Capitol insurrection was orchestrated by leftist Antifa group. He has also bemoaned the Democratic party for trying to “replace the current electorate” with “voters from the third world” through immigration policies: what is known as the “great replacement theory” that has originated in the far right.

The Fox News host appears to not only have interviewed Rittenhouse for the show, but has also filmed a short documentary on Rittenhouse during his trial. A clip of Rittenhouse in the backseat of a car, seemingly right after his not guilty verdict, was previewed on Carlson’s show Friday night.

“The jury reached the correct verdict. Self defense is not illegal,” Rittenhouse says in the clip.

Mark Richards, an attorney for Rittenhouse, told CNN’s Chris Cuomo that a Fox film crew was embedded with the defense team for the duration of the trial, which Richards did not approve of. “I threw them out of the room several times,” Richards said. “I don’t think a film crew is appropriate for something like this.”

Richards told Cuomo that the people who fundraised for Rittenhouse’s defense were “trying to raise money” and that Rittenhouse’s family and his advisers approved of the film crew being there during the trial.

In the aftermath of the Rittenhouse verdict and the success of his self-defense argument, some experts have raised concerns that Rittenhouse’s verdict will empower extremist movements and provoke violence in the name of vigilantism.

“It has never taken more than a whisper of approval to fan the flames of militant right action, and the Kenosha acquittal is a shout,” wrote Kathleen Belew, a historian who studies the white power movement, on Twitter.

Jeri Bonavia, executive director of the Wave Educational Fund, an organization in Wisconsin that aims to prevent gun violence, told NBC News that the trial is “feeding this idea that individual citizens need to be out there, not as part of a functioning society, but as these rogue dispensers of justice”.

Hours after Rittenhouse’s not guilty verdict was delivered, US attorney general Merrick Garland spoke at the swearing in of Manhattan’s new US attorney and emphasized the role the justice department plays in protecting civil rights, noting the department’s history in combating the Ku Klux Klan and protecting voting rights.

At the ceremony, Damian Williams, who is the first Black top federal law enforcement official overseeing the southern district of New York, one of the country’s most powerful federal courts, said that he’s establishing a civil rights unit in his office’s criminal division to concentrate greater resources on problems worsening in “troubled times”.

Patches of protests were seen in cities across the country on Friday in response to the Rittenhouse verdict.

The protests, including one outside of the courthouse in Kenosha, were largely peaceful. Protests in Portland, where far-right groups have clashed with leftwing activists, were declared a riot last night after demonstrators started to break windows and throw objects at police.