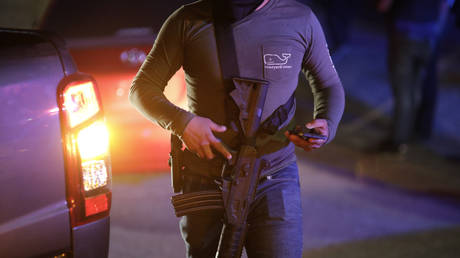 Dozens of Honduran police officers surrounded the home of former president Juan Orlando Hernandez on Monday after Washington requested that he be arrested and extradited.

Hernandez has already been placed on a US blacklist, and Secretary of State Antony Blinken stated in early February that there were credible reports Hernandez “has engaged in significant corruption by committing or facilitating acts of corruption and narco-trafficking.”

A witness told Reuters that around 100 police officers including special forces, as well as military police, were waiting outside Hernandez’s house. Barriers were also erected to secure the area.

Hermes Ramirez, Hernandez’s lawyer, told Canal 5 television that the proposed arrest and extradition of the former president was illegal because he has immunity as a member of the regional Central American parliament.

“They are trying to trample on the rights of President Hernandez,” Ramirez said.

News of a US extradition request was announced by Honduras’ Foreign Affairs Ministry but did not mention any names. However, Honduras’ current vice president, Salvador Nasralla, confirmed to the Associated Press that the request names Hernandez.

The president of the Supreme Court of Justice has also called for an urgent meeting to elect a judge to oversee the extradition case.

There has been speculation for months as to whether the US would attempt to extradite Hernandez when he left office. US prosecutors had repeatedly implicated him during his brother’s 2019 drug trafficking trial and claimed that his political ascent was fueled by narco profits.

Hernandez held the position of president for eight years.

With Market Volatility, Why are People So Bullish on Cardano?