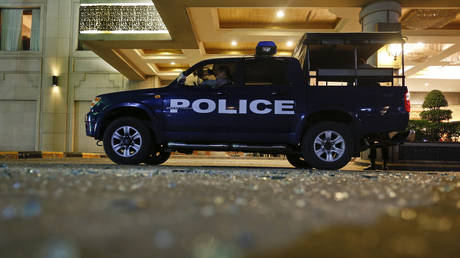 Five people have been killed after security forces in Myanmar rammed an SUV into a crowd of anti-coup protesters in the Southeast Asian country’s largest city Yangon, local media have reported.

The crowd occupied a road, blocking traffic on it, and security forces then used the harshest means to disperse the unsanctioned rally.Shocking videos uploaded to social media have shown a speeding car ramming into the demonstrators and knocking to the ground some who were unable to flee.

They said they will not kill citizens and today morning they shot and ran over with their car to harmless and innocent citizens, THAT SHOULD STOP!!@freya_cole @RapporteurUn @JoeBiden @VP @INTERPOL_HQ#Dec5Coup pic.twitter.com/va9fz7vxET

According to witnesses, soldiers then got out of the SUV and started pursuing the scattering protesters, beating up and arresting those they could catch.

Junta Terrorists brutally cracked down the protest in #Yangon’s #KyiMyinDine town this morning. They opened gunfire and rammed vehicles into the crowd, KILLING at least 4 protesters and severely injuring many others. 2 women & 5 men were ABDUCTED so far. #WhatsHappeningInMyanmar pic.twitter.com/wx2OJW5wb2

Should Private Investors Be Running Our Cybersecurity?

Five people lost their lives as a result of the ramming, while 15 others ended up being detained, outlet Myanmar Now is reporting. Witnesses also spoke about dozens of injuries, with some people being left unconscious and others sustaining head wounds.

“I got hit and fell down in front of a truck. A soldier beat me with his rifle but I defended and pushed him back. Then he immediately shot at me as I ran away in a zig-zag pattern,” one of the protesters, who managed to escape, told Reuters.

Myanmar has been gripped by unrest since February when the military moved to arrest Aung San Suu Kyi and the country’s other top officials. Last month, they were charged with election fraud during the 2020 vote, but have rejected the accusations. International observers, who worked at the election said it was mostly free and fair.

Thousands of people took to streets across the country in the wake of the coup, but faced a violent crackdown, with police and military often resorting to the use of live fire against crowds.

More than 1,300 demonstrators have been killed in Myanmar during the last ten months, according to prisoners’ aid organization AAPP. The military denies these numbers.

The scale of demonstrations has subsided since the coup, with many protesters switching to guerrilla tactics and staging smaller ‘flash mob’ rallies across the country.