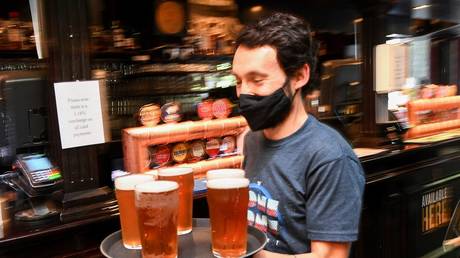 Australians have been pegged the heaviest drinkers in the world after consuming alcohol to the point of insobriety nearly twice as much as people elsewhere during 2020, an annual international survey of drug use has found.

More than 32,000 people from 22 countries reported their drug and alcohol consumption to the Global Drug Survey 2021. The report, released on Thursday, found Australian respondents got drunk more than twice a month (about 27 times a year) while the global average was around 14 times, or a little more than once a month.

Denmark and Finland were tied in second place, with respondents from each country reporting getting drunk nearly twice a month last year. The survey defined being drunk as situations where physical and mental faculties were impaired to the point that balance, focus, and speech were affected. Mexican drinkers were found to be the least likely to experience this state.

Almost a quarter of Australian respondents felt regret about their drinking habits, with nearly three-quarters of participants from Down Under reporting being unhappy that they “drank too much too quickly.” However, Irish drinkers felt the worst about becoming inebriated, with more than a quarter “wishing [they] had drunk less or not drunk at all.”

Australian drinkers also tied with Finnish respondents at the top of the list when it came to seeking emergency medical treatment for “serious” alcohol-related situations. Rates of seeking medical attention in both countries were almost triple the global average, putting added pressure on Covid-hit public healthcare systems.

Survey lead researcher Monica Barratt told Australian news outlet The Latch that people in the country “got on the beers” during the Covid-19 pandemic since most regions avoided the extended lockdowns seen in other countries over the past year. Other than Victoria, most states and territories only went through short and sharp lockdowns, which allowed hospitality venues to remain open and more events to take place.

From Epic Fantasies to Hilarious Rom-Coms, These Are the Best YA Books of 2022

Why Proof-Of-Work Is A Superior Consensus Mechanism For Bitcoin