Democrats on Friday once again postponed a vote on the centerpiece of Joe Biden’s economic vision, after lobbying by the president and House leaders failed to persuade a small group of moderates to support the spending package without delay.

Despite the setback, House speaker Nancy Pelosi said she planned to plow ahead with a vote on the bipartisan infrastructure bill, another key pillar of the president’s legislative agenda that has been stalled for months. Its fate was uncertain amid Republican opposition and resistance from progressives, who have long made their support for the measure contingent on the passage of the larger, social policy and climate mitigation spending package.

“We had hoped to be able to bring both bills to the floor today,” Pelosi said at an impromptu news conference on Friday. Nevertheless, she insisted the House was on the cusp of a “historic” breakthrough that would not only send the infrastructure bill to Biden’s desk, notching a much-needed victory, but would bring the party a “major step” closer to approving the social policy package. Expressing confidence, Pelosi said she had a “pretty good feel” about the evening’s vote.

“We’re in the best place ever, today, to be able to go forward,” she said.

But her optimism stood in stark contrast to the feeling of deja vu settling on the Capitol, as House Democrats once again faced the prospect of leaving Washington without passing either the $1.2tn bill to upgrade roads, bridges, waterways and broadband, or the roughly $2tn package aimed at combating the climate crisis while reforming the nation’s healthcare, education and immigration systems.

In a sign of how critical the vote is, the White House announced late Friday that Biden would remain in Washington to try to break the impasse between liberals and moderates.

A plan to advance both pieces of legislation was upended by pushback from about half a dozen centrist holdouts, who demanded an official accounting of the spending bill, which had undergone substantial changes in recent weeks. Before giving their support, these lawmakers wanted to first see a cost analysis from the non-partisan Congressional Budget Office, which could take weeks.

As tensions escalated throughout the day, Pelosi proposed a new strategy. In a letter to Democrats, she announced the House would hold two votes on Friday: one on the infrastructure measure and a procedural vote related to the spending package.

“As we’ve consistently said, there are dozens of our members who want to vote both bills — the Build Back Better Act and the Infrastructure Investment and Jobs Act — out of the House together,” Washington congresswoman Pramila Jayapal, chair of the powerful Congressional Progressive Caucus said in a statement.

“If our six colleagues still want to wait for a CBO score, we would agree to give them that time – after which point we can vote on both bills together,” she said.

The standoff capped a day of frenzied negotiations and meetings as Democratic leaders sought to salvage the legislation from yet another delay in a process beset by false starts. But unexpected losses in Virginia and elsewhere across the country injected a sense of urgency among Democrats to prove they could govern.

With razor-thin majorities, Democrats need the support of every Democratic senator and nearly every House Democrat.

Negotiations have seen the initial Biden spending proposal nearly halved from $3.5tn, with many provisions pared back or dropped entirely.

Biden, touting a strong monthly jobs report on Friday, implored House Democrats to “vote yes on both these bills right now”, arguing both pieces of legislation were critical to economic recovery.

“Passing these bills will say clearly to the American people, ‘We hear your voices, we’re going to invest in your hopes,” Biden said on Friday morning.

After his remarks, the president said he was returning to the Oval Office to “make some calls” to lawmakers.

Pelosi worked furiously on Thursday to pave the way for a vote before lawmakers leave Washington for a week-long recess, whipping members on the House floor and keeping them late into the night in an effort to shore up support for legislation which runs to more than 2,000 pages.

If passed, the spending bill will go to the 50-50 Senate, where it will face new challenges. Two centrist Democrats, Joe Manchin and Kyrsten Sinema, have already thwarted many proposals and are expected to have further objections.

House approval of the infrastructure bill, which has already passed the Senate with the support of 19 Republicans, would send the measure to the president’s desk.

The months-long legislative battle has seen the initial spending proposal nearly halved from $3.5tn, with many provisions pared back or dropped entirely.

As drafted, the proposal would have provided a large numbers of Americans with assistance to pay for healthcare, raising children and caring for elderly people at home. There would be lower prescription drug costs and a new hearing aid benefit for older Americans, and the package would provide some $555bn in tax breaks, encouraging cleaner energy and electric vehicles, the largest US commitment to tackling climate change.

House Democrats have added other key provisions, including a new paid family leave program and work permits for immigrants.

Much of the cost would be covered with higher taxes on those earning more than $400,000 a year and a 5% surtax on those making more than $10m. Large corporations would face a new 15% minimum tax. 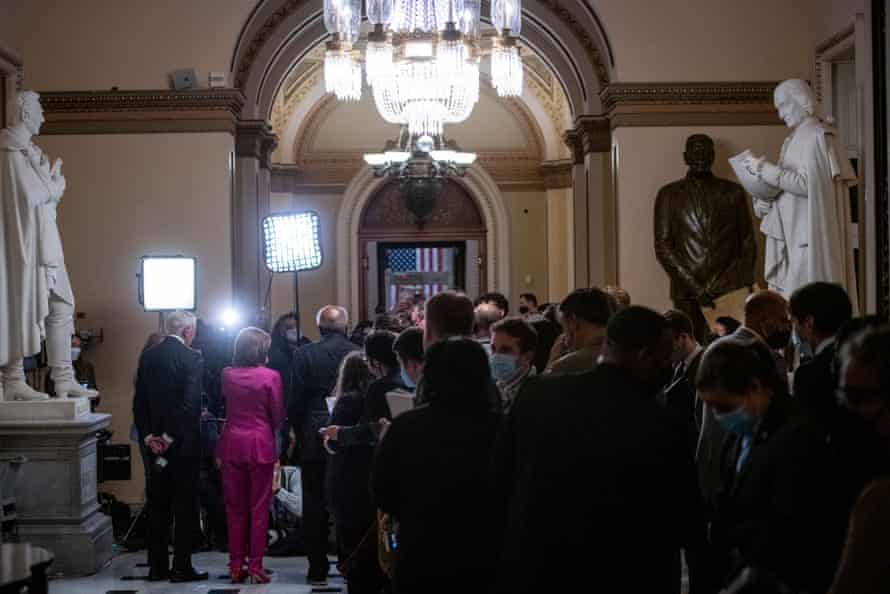 The Blay Report: Mickey Boardman Talks Addiction, Body Image, Failure, and Triumph “You Have to Learn from Experience that You are Worthy and Deserving”