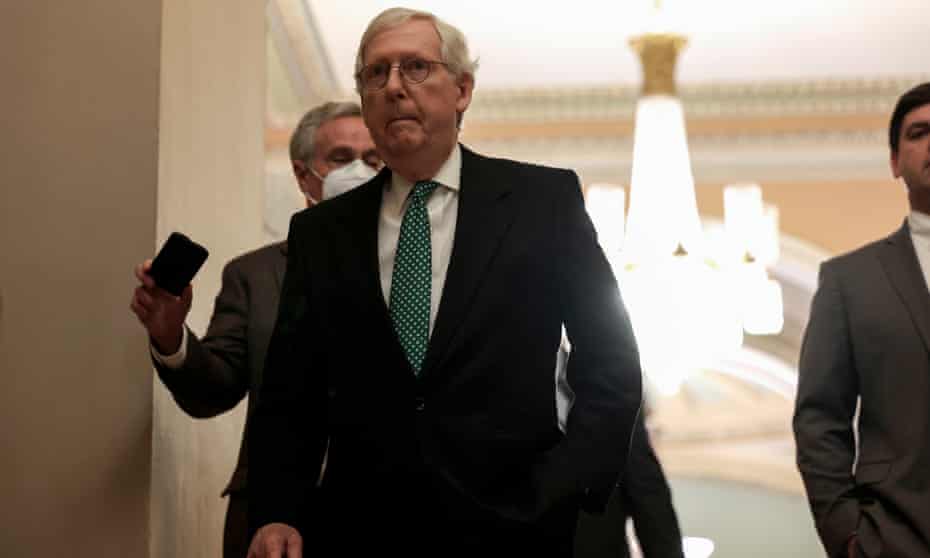 The Senate was poised on Wednesday to block a bill that would codify abortion rights into federal law, in a largely symbolic vote Democrats said was critical to mobilizing Americans around the issue ahead of a likely supreme court decision overturning Roe v Wade.

Democrats moved quickly to hold the vote after a leak last week of a draft opinion, written by Justice Samuel Alito in February and confirmed as authentic, indicated that a majority of the court had privately voted to strike down Roe and subsequent rulings.

The extraordinary disclosure ignited protests around the country, pushing the deeply divisive issue to the center of US political life.

Wednesday’s vote, a repeat of one staged by Senate Democrats in February, when they failed to win even a simple majority to allow consideration of the House-passed measure, was again largely an exercise in futility.

The bill was all but certain to stall in the Senate, well short of the 60 votes needed to overcome a Republican filibuster. Nevertheless, Democrats, under intensifying pressure to act, see a political opportunity in forcing Republicans to vote against a bill protecting abortion at a moment when the threat to access is urgent and polls show a majority of Americans want the procedure to remain legal in all or some cases.

They hope to use the Republican blockade as a data point in their midterm message to voters: that the GOP has become a party of “ultra-Maga” extremists, on the cusp of fulfilling a decades-long goal to strip women of their reproductive rights.

It is an issue Democrats hope will energize young voters disenchanted by the Biden administration and persuade Republican-leaning suburban women to back them again this cycle.

“Before the day is over, every member of this body will make a choice: vote to protect the fundamental rights of women across the country, or stand with five conservative justices ready to destroy these rights in one fell swoop,” the Senate majority leader, Chuck Schumer, said in a floor speech ahead of the vote, which he called “one of the most consequential we will take in decades”.

If passed, the bill would codify Roe v Wade into federal law, ensuring the right of healthcare providers to perform abortions and the right of patients to receive them. But it would also go further, in some cases invalidating state-level restrictions on abortion access enacted after the Roe decision in 1973.

As such, Republicans are casting the bill as a “radical” attempt to expand reproductive rights that goes far beyond Roe and would legalize “abortion on demand”.

“We will stand with the American people, stand with innocent life, and block the Democrats’ extreme bill,” the Senate minority leader, Mitch McConnell, said on Wednesday.

Republicans are betting the economy will take precedence over abortion this November. Polling shows Republicans are well positioned to make significant gains in the midterm elections, buoyed by historical headwinds, discontent with the party in power and widespread concern over the rising cost of gas, food and rent.

But there are signs that Republicans do worry about a potential political backlash if Roe is overturned and states move swiftly to outlaw abortion, as many are preparing to do.

A day ahead of the vote, McConnell sought to tamp down conservative calls for a nationwide ban on abortion if they can control of the chamber in November, telling reporters: “Historically, there have been abortion votes on the floor of the Senate. None of them have achieved 60 votes.”

Two Senate Republicans who support abortion rights have proposed an alternative measure they say is tailored to reflect the landscape of abortion rights. But many Democrats see their proposal, which is not expected to receive a vote, as too weak.

Joe Manchin, a conservative Democrat from West Virginia who has generally opposed abortion rights, said he would support an alternative codifying of Roe, but would vote against the Democratic bill.

In a dramatic shift, one of the only other Democrats in Congress with conservative views on abortion rights, Bob Casey of Pennsylvania, said he would support the legislation. In a statement citing the leaked supreme court ruling, he said the “circumstances around the entire debate on abortion” had changed since the last time the Senate voted on the measure.

Without a clear legislative path, Democrats are aiming at the fall elections, urging Americans to elect them as the “last lines of defense” against the end of Roe.

Abortion is also likely to be a major issue in races for governor and state offices, as the battle lines shift to the states.

The show vote on Wednesday only intensified calls from progressives and abortion rights groups for Democrats to eliminate the filibuster. The long-simmering debate has divided the party, which does not have enough votes to end the rule. It has also energized efforts to reform the supreme court, including controversial proposals such as expanding the number of justices on the bench or imposing term limits.

Bitcoin not cut out to be “world’s reserve currency”: Charles Hoskinson

US warns of ‘distinct possibility’ Russia will invade Ukraine within days

Republicans’ decision to ignore Jan 6th subpoenas will come back to haunt them: legal...

A Complete Timeline of Laurie Hernandez and Charlotte Drury’s Relationship