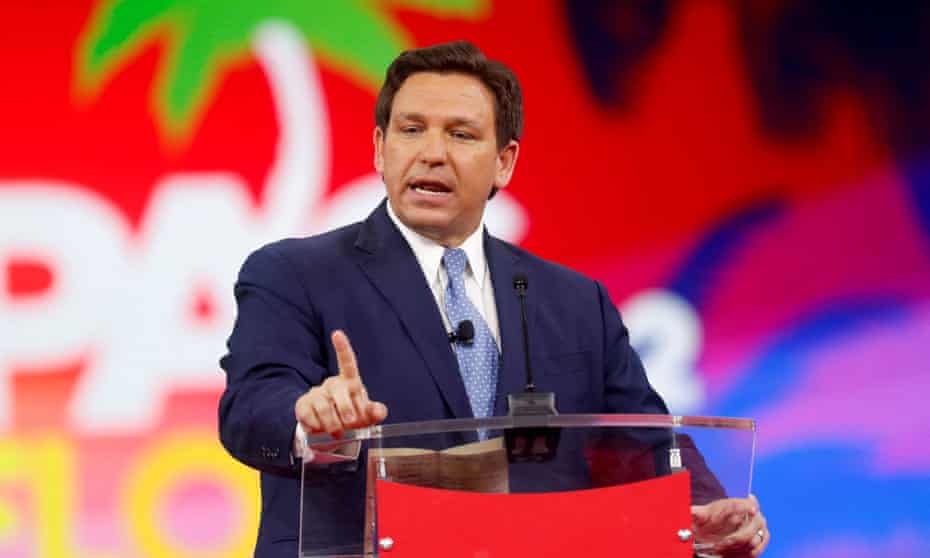 As Florida Republicans gave final approval to new congressional districts on Thursday, Black lawmakers staged a sit-in on the floor of the legislature, praying, chanting and singing that Black voters were under attack in the state.

The extraordinary moment served as a remarkable endpoint to a brazen attack by the Republican governor, Ron DeSantis.

Earlier this month, in an unprecedented move, Republicans in the legislature took the unusual step of allowing DeSantis to take the lead on drawing new congressional districts. The governor’s plan went out of its way to reduce from four to two the number of districts where Black candidates can elect the candidate of their choosing.

The plan significantly distorts the map in favor of Republicans, giving them a hold on 20 of 28 congressional seats in a state Donald Trump won in 2020 with 51.2% of the vote. According to FiveThirtyEight, the Florida map is nearly tied with Texas as the most biased in the US.

DeSantis got his map after rejecting less biased but still GOP-friendly maps proposed by the legislature. The fact the legislature ceded its power to DeSantis only underscores how the governor, considered a potential presidential candidate in 2024, controls Florida politics.

“For all intents and purposes, there’s currently, in Florida, one-man rule,” said Mac Stipanovich, a longtime Republican strategist who is now retired.

“Democracy in Florida is not functioning. It’s not gone, the structure is there, the possibility of a return to representative government with checks and balances remains. But it’s not currently functioning.”

DeSantis’s plan does not make a serious effort to comply with legal protections for minority voters. An amendment in the Florida constitution, overwhelmingly approved in 2010, makes it illegal to draw a district that diminishes the ability of a minority to elect the candidate of their choosing. DeSantis nonetheless eliminated two districts that allow Black voters to do so.

The governor has openly talked about his desire to get rid of the fifth congressional district, which is 46% Black and stretches from Jacksonville to Tallahassee.

The governor has said the district, currently represented by a Black Democrat, is an illegal racial gerrymander because it was drawn to preserve the ability of Black voters to elect the candidate of their choice. DeSantis’s plan chops the district into four Republican districts where Black voters would comprise a much smaller share of the population.

DeSantis’s plan appears to have “all the hallmarks of intentional discrimination”, said Stuart Naifeh, an attorney at the NAACP Legal Defense and Educational Fund who works on redistricting cases.

The protest started on Thursday after Yvonne Hinson, a Democrat from Gainesville, was speaking about her work during the civil rights era only to have her mic cut off when her time expired.

“I’ve been kicked. I’ve been talked about and I have been called names you don’t even put in the dictionary any more,” she said. “The Voting Rights Act of 1965, I fought for that. I’ve met Martin Luther King, I don’t just talk about him. He taught me peaceful protests, and here we are in 2022, rolling back the tide.”

Two Black lawmakers, Tray McCurdy of Orlando and Angie Nixon of Jacksonville, wore T-shirts that said “Stop the Black attack” as they protested on the House floor.

“What we have here is a group of people who are worried and concerned and scared about the browning, about the darkening of our country and they are trying to hold on to power so much that they are changing the rules,” Nixon told reporters.

DeSantis and his attorneys have shown little concern for precedent but made it clear they are betting federal and state courts will agree with their interpretation of the law.

The US supreme court has long said lawmakers can consider race in redistricting if they have justification, as long as it’s not the predominant factor, said Michael Li, a redistricting expert at the Brennan Center for Justice.

The supreme court’s conservative majority has recently signaled, however, that it is very skeptical of the use of race in redistricting.

“They’re trying to see what they can get away with,” said Stuart Naifeh, of the NAACP Legal Defense Fund. “Speaking from the view of what the courts have done more recently, they may get away with it.”

DeSantis appears eager to attack the anti-gerrymandering language Florida voters added to the state constitution. In addition to outlawing discriminatory gerrymandering based on race, the language also bans partisan gerrymandering.

“I think our dispute very well may lead to saying that Florida’s redistricting amendments are not consistent with the 14th amendment’s equal protection clause,” the governor said in March.

“It’s a dismantling of our rule of law,” said Cecile Scoon, president of the Florida chapter of the League of Women Voters, which filed a lawsuit challenging the maps on Friday.

“If each one of us simply said, ‘I don’t agree, I’m gonna do exactly the opposite of that law,’ I don’t know how we can manage a government and manage change in a lawful way which is what Americans are known for.”

Dive Into The Cryptoverse With Phemex Online Learning Solution