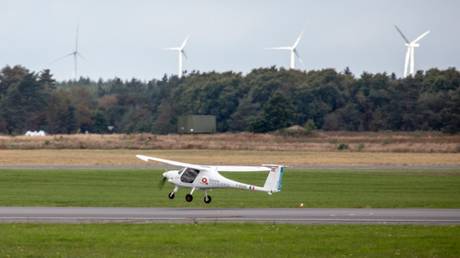 Denmark’s air force showed off its brand-new electric-powered planes on Thursday, saying its test flights have so far proven that the cheaper-to-run, more eco-friendly technology has potential.

It had obtained the two Velis Electro jets from Slovenian manufacturer Pipistrel, becoming the first military in the world to operate this type of hardware.

“The aircraft are 100% emission-free, very quiet, and otherwise cheap to operate,” Lieutenant Colonel Casper Børge Nielsen of the Defense Ministry’s material and procurement agency said. Initial tests indicate “there may be perspectives in using electric aircraft when the technology becomes mature,” he added.

Denmark has leased the planes for two years, rather than buying it, to avoid the “risk of ending up with equipment that we can’t really use,” Børge Nielsen said. During the lease period, the Danish Air Force hopes to gain an insight into the benefits and disadvantages of the jets’ technology to decide how it can be applied in the future.

The pilots described flying the one-man light electric planes, which are powered by two lithium batteries, as “exciting,” saying they were “built well and fly well.”

Last year, the United States military said it had been keeping an eye on the development of electric-powered planes, describing their ability to approach targets silently as “tremendous.” However, their battery capacity isn’t currently sufficient to meet the US Air Force’s needs.

Work on electric aircraft has been underway since the 1970s, but the battery issue has been a stumbling block in the way of wider adoption of the technology. Global military interest could change all that, stimulating research and investment.

The switch to electric power is likely to be a win-win across the board, as it will drastically reduce CO2 emissions and also make flying much cheaper for commercial carriers and their passengers.

Scott Disick was given ‘outrageous money’ to join Hulu show

1st-ever nationwide lockdown for the unvaxxed is on the cards

Vic Morrow’s Double Jeopardy on a Movie Set Ended with a Crash That Took...