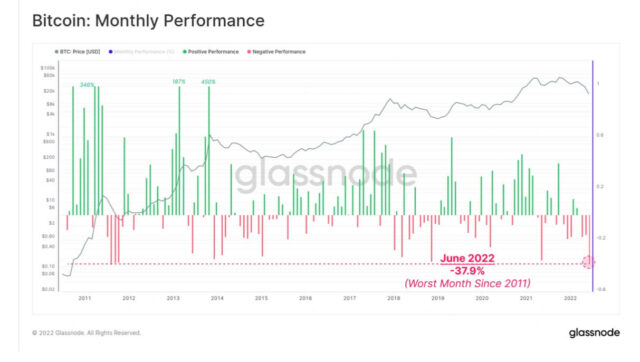 Bitcoin’s (BTC) price crash has pushed out “market tourists,” and only long-term holders are currently trading the asset, a Glassnode report revealed on July 5.

According to the report, Bitcoin recorded its worst-performing month since 2011 in June as it recorded a 37.9% drop in its price.

Due to the record-breaking crash, there has been a purge of market tourists — short-term Bitcoin investors who were drawn to the asset during the last bull run.

For Shrimps, the current Bitcoin price makes it attractive and affordable. It continued that this class of hodlers is buying at a rate of about 60,500 BTC per month — the “most aggressive rate in history.”

The report identified other trends that suggested the end of Bitcoin tourism, including declined on-chain activity because of less demand and waning interest from investors.

The number of active addresses declined

Since November 2021, there has been a steady decline in active entities and addresses. According to Glassnode, address activities dropped from over 1 million per day to 870,000, while active entities now stand at 244,000 per day.

Glassnode continued that the overall growth rate of market participants has been “lackluster” as the user-base growth plunged to 7000 per day — a rate similar to the lows of the 2018 and 2019 bear markets.

Bitcoin transaction count is “sideways,” which indicates that new entry demand for the asset has stagnated. The report added that this metric could also mean “a probable retention of a base-load of users (the hodlers).”

Glassnode noted that with the number of addresses with a non-zero balance reaching an all-time high of 42.3 million, the transaction count decline also reflected how the market tourists had been pushed out.

Self-custody on the up

According to Glassnode, crypto exchanges have recorded increased withdrawals and declined deposits due to several lending providers’ suspending deposits and withdrawals.

Exchange reserves are currently at a low last seen in July 2018.

However, interest in self-custody has grown as investors withdraw their assets to wallets with no spending history.

The post Crypto winter too harsh for ‘tourists’ appeared first on CryptoSlate.