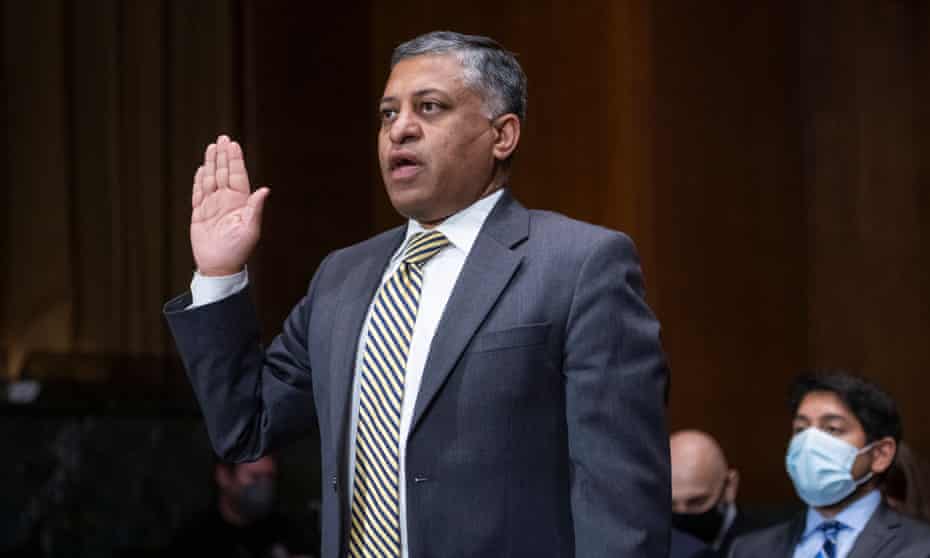 Joe Biden is on record as the first US president to embrace a concept known as “harm reduction” – a public health approach that aims to mitigate harm done by drug use instead of the traditional just-say-no-ism of past administrations.

Administration officials have said last week that the federal government will now support harm reduction concepts – like giving sterile syringes to people who inject drugs – in an effort to curb the transmission of infectious diseases.

But the Biden administration has appointed Rahul Gupta as the nation’s new director of the Office of National Drug Control Policy despite the West Virginian having a controversial relationship to harm reduction policies in the past.

The appointment of Gupta, a personal friend of Joe Manchin, the West Virginia senator, has sparked concern among some drug policy campaigners who see the move as at odds with the administration’s stated aims of a change in focus when it comes to harm reduction policies.

The biggest criticism of the new “drug czar” comes from public health experts who recall the role he played in shutting down West Virginia’s largest syringe service program in the state’s capital of Charleston – now home to what the CDC has called “the most concerning HIV outbreak in the nation”.

In the wake of the program’s shutdown, which Gupta supported, the state has formalized new legislation that is likely to shut down nearly all of its harm reduction programs despite facing multiple, new HIV clusters related to injection drug use.

When Gupta began working as the director for the West Virginia bureau of public health in 2015, the state was entering a new phase of the opioid crisis. Prescription pill usage was trending down, but only because it was being replaced by people injecting heroin and fentanyl. The number of overdoses in West Virginia for that year more than doubled the number of people who had died in car accidents.

Nationwide, the increase in injection drug use drove an uptick in new HIV cases, especially in small towns. In rural communities across the nation, where syringe possession without a prescription is often criminalized, people hooked on opioids still face two options: reuse (and perhaps share) already used needles or go into potentially fatal drug withdrawal.

One community of 3,700 people in south-eastern Indiana went from having fewer than five HIV cases to 235 seemingly overnight in 2015. Surrounding local governments, desperate to find solutions, decided to buck small town conservatism and try an idea typically found in large cities, one grassroots outreach workers had been using for years: harm reduction.

Although these governments couldn’t prevent people from using drugs, they could reduce the harm associated with their usage – especially the impact their usage had on public health. A syringe program was started in Scott county, Indiana, to provide people who inject drugs with sterile syringes. The results were staggering.

In less than a year, there was an 88% drop in syringe sharing – a key victory in controlling the spread of HIV. Public health experts across the nation identified what was done in Indiana as the first step in preventing HIV transmission among people who inject drugs.

Following the outbreak in Indiana, the CDC identified 220 counties across the US considered high-risk for HIV outbreaks associated with IV drug use. Of West Virginia’s 55 counties, 28 were on that list.

But in West Virginia, where Donald Trump’s brand of conservatism led to a state-record shattering 42.2% margin of victory in 2016, the rhetoric of giving people who use drugs syringes was a hard sell.

The KCHD syringe program served nearly 25,000 people in the three years it operated. For a city of 49,000 residents, the program was meeting a massive demand for clean syringes. But, by 2018, conservative politicians and residents alike had successfully rallied against the program.

An ugly public feud pitted former mayor Danny Jones and his supporters against the program and anyone who supported it. Jones, who in an interview had professed that people who use drugs should “be locked up until they’re clean”, enacted a series of changes on the program that include putting a police officer in charge of its design.

The biggest criticism of Dr Gupta from his time as the state’s public health commissioner stems from an audit of the syringe program his office was asked to do by Jones. Flouting CDC recommendations that support lowering barriers to access and guidelines set up by his own office, Gupta’s audit called for a suspension of the syringe program because it didn’t require participants to first seek treatment for drug use before accessing clean syringes.

In an interview with the Guardian Pollini said: “The report was arbitrary in faulting the program for not adhering to practices that were not even required by the state certification guidelines” – guidelines written by Dr Gupta’s own office.

When Gupta decided to leave West Virginia in 2018, Charleston and the surrounding county had fewer than five HIV cases related to IV drug use. Since then the number of new cases has gone up to 85, prompting the CDC to send in a team of disease intervention specialists.

“They warned us there was going to be a massive HIV outbreak.” said April, who contracted HIV in Charleston last year from IV drug use and did not want her last name used. “I thought they were just trying to scare us into not using. But, they were right.”

She added that she and people she had use drugs with didn’t have to share needles when the program was operational. “But as soon as it shut down, people started selling them just like they did dope.”

But beyond the immediate public health crisis prompted by shutting down the state’s largest sterile syringe program, Gupta’s audit’s legacy lives on in the form of new legislation that has made it illegal for harm reduction programs in West Virginia to follow CDC guidelines.

Proponents of the bill held up his report as an example of a public health official advocating for higher thresholds on syringe programs. As a result, three of the 28 counties in West Virginia originally identified as high-risk for HIV outbreaks have shut down their syringe programs, citing restrictions placed on their programs by the new law.

Three years after the KCHD program was decertified by Gupta, people desperate for housing and access to medical supplies are not hard to find on the streets of Charleston. A man named Tommy said clean syringe access has completely dried up since the shutdown of the program.

Desperate to reuse old needles, he described how people who are desperate to straighten out a used needle use the flint on matchbooks to reshape old needles which have been bent from use. He said the current market value for a clean syringe on the streets is around $5. Alternatively, people can get a used one for between $1 and $2.

Seeing the devastation caused to her state’s public health by people who misunderstand or outright oppose harm reduction over the past few years, Dr Pollini is left with one question over the newly confirmed head of ONDCP. “Does he have a better understanding of these programs than he did three years ago?” Pollini asked.

The White House was asked for comment but did not respond.