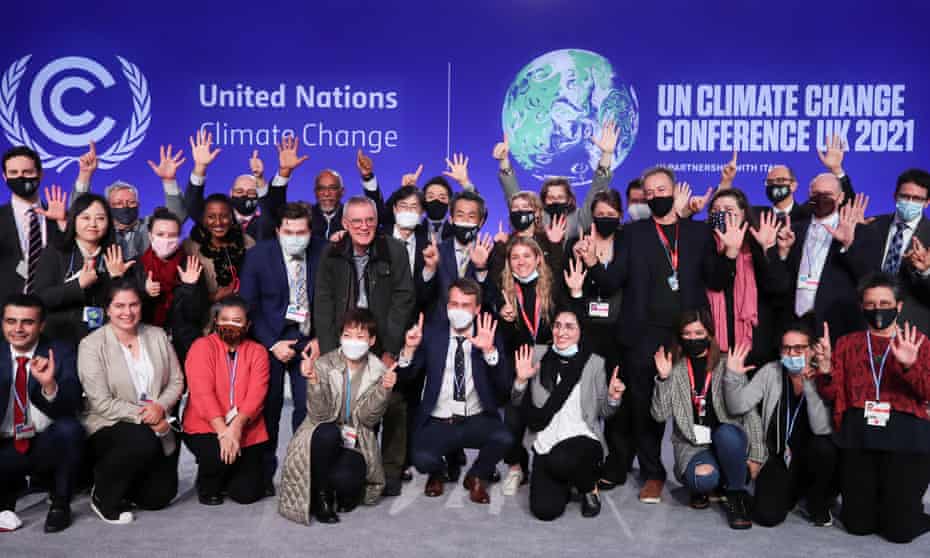 Countries have agreed a deal on the climate crisis that its backers say will keep within reach the goal of limiting global heating to 1.5C, the key threshold of safety set out in the 2015 Paris agreement.

Alok Sharma, the UK cabinet minister and Cop president, said the deal was “imperfect” but showed “consensus and support”. He said: “I hope we can leave this conference united having delivered something significant for people and planet together as one.”

The “Glasgow climate pact” was adopted despite a last-minute intervention by India to water down language on “phasing out” coal to merely “phasing down”.

The pledges on emissions cuts made at the two-week long Cop26 summit in Glasgow fell well short of those required to limit temperatures to 1.5C, according to scientific advice. Instead, all countries have agreed to return to the negotiating table next year, at a conference in Egypt, and re-examine their national plans, with a view to increasing their ambition on cuts.

That will be a tricky process, as some countries contend that they are already doing their utmost. Even the small step of agreeing to revise the plans was only achieved after overcoming stiff opposition, yet revision is essential if the world is to avoid surpassing the 1.5C threshold.

Poor countries were also left frustrated at the pact, which they said did not address their concerns about “loss and damage”. This refers to the destruction caused by extreme weather, which is now hitting vulnerable countries far harder and more frequently than had been predicted.

Current climate finance, which is provided to countries to help them invest in green technology and other emissions-cutting efforts, and to adapt to the impacts of the climate crisis, is already falling short of promises, and even if fulfilled would be insufficient to cover these heavy losses and humanitarian disasters. By 2050, these hits could amount to a fifth of GDP for some poor countries, according to estimates from the charity Christian Aid.

But rich nations have been reluctant to agree any mechanism for financing loss and damage, in part because some of the debate has been framed in terms of “compensation” for their losses, which rich countries cannot countenance.

Mohamed Adow, director of the Nairobi-based thinktank Power Shift Africa, said: “The needs of the world’s vulnerable people have been sacrificed on the altar of the rich world’s selfishness. The outcome here reflects a Cop held in the rich world and the outcome contains the priorities of the rich world.”

Many poor nations accepted defeat on their pleas to put stronger provisions on loss and damage into the text, in the closing hours of the conference, in order to allow the broader deal to go through.

Making the concession, Lia Nicholson, lead negotiator for Antigua and Barbuda, which chairs the 37-strong Alliance of Small Island States, said: “We are extremely disappointed and we will express our grievance in due course.”

Adow added: “We are leaving empty-handed but morally stronger, and hopeful that we can sustain the momentum in the coming year to deliver meaningful support which will allow the vulnerable to deal with the irreversible impacts of climate change, created by the polluting world, who are failing to take responsibility.”

One of the most contentious clauses in the final decision was a vaguely worded resolution to accelerate the phase-out of coal and “inefficient” fossil fuel subsidies, which was weakened to “phase down” by India at the last minute. Energy experts are clear that phasing out coal completely will be essential to stay within 1.5C of global heating, but the opposition to the inclusion of the reference to a phase out – particularly from major coal-using countries including China, India and South Africa – showed how hard it will be to gain a global end to the dirtiest fossil fuel in time to avoid a 1.5C rise.

Fatih Birol, executive director of the International Energy Agency, told the Observer that more than 40% of the world’s existing 8,500 coal plants would have to close by 2030, and no new ones could be built, to stay within the limit. He said: “I would very much hope that advanced economies take a leading role and become an example for the emerging world. If they don’t do it, if they don’t show an example for the emerging world they shouldn’t expect from emerging world to do it.

Carbon emissions must fall by 45% by 2030, compared with 2010 levels, to have a good chance of sticking to the 1.5C limit, according to the Intergovernmental Panel on Climate Change. But emissions, after a brief plunge last year owing to the Covid-19 lockdowns, are set to rise again by a record amount next year as countries return to their fossil-fuel habits.

Some observers said the talks – which despite disagreements were not characterised by the bitter acrimony and obstructionist tactics that have been seen at many previous Cops – showed a spirit of cooperation that could bode well for the future, however.

Ani Dasgupta, president of the World Resources Institute, a US civil society group, said: “In a year marked by uncertainty and mistrust, Cop26 affirmed the importance of collective global action to address the climate crisis. While we are not yet on track, the progress made over the last year and at the Cop26 summit offers a strong foundation to build upon. The real test now is whether countries accelerate their efforts and translate their commitments into action.”

Lord, Give Me the Strength Not to Cry Over Sam Asghari’s Birthday Post For Britney Spears

Meet haunting, the opposite of ghosting