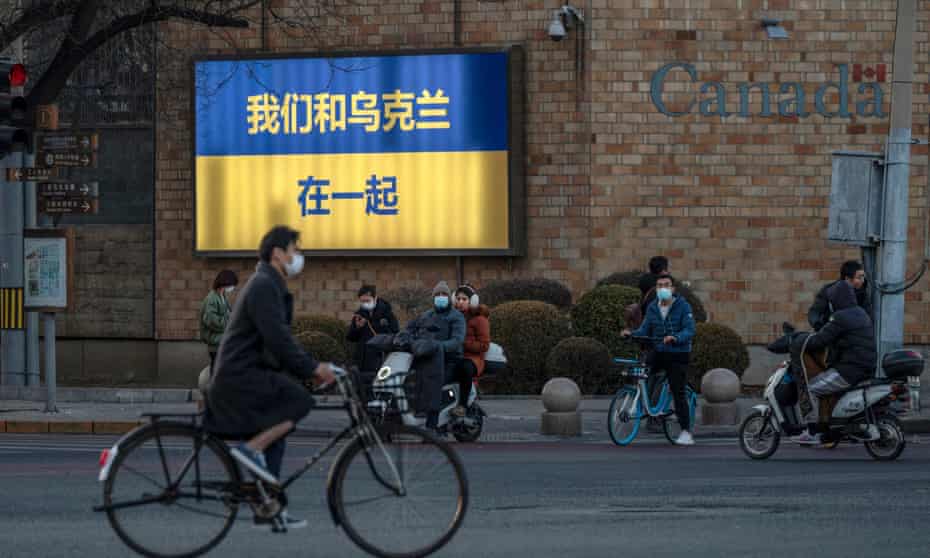 China has signalled its willingness to play a mediator role in the conflict between Russia and Ukraine as the war entered its sixth day.

In his first phone call with his Ukrainian counterpart, Dmytro Kuleba, since the outbreak of the war, China’s foreign minister, Wang Yi, said on Tuesday that Beijing “laments” the outbreak of the conflict and is “extremely concerned” with the harm to civilians, according to a Chinese readout.

State-owned China Central Television said Kuleba asked China to use its influence to help mediate in its conflict with Russia. It added that Kuleba “asked for help in finding a diplomatic solution”.

The Chinese foreign ministry said the call was initiated by the Ukrainian side. The two foreign ministers also discussed evacuation of Chinese nationals from Ukraine, in which there were 6,000 Chinese citizens living, working and studying there, according to official figures.

“Ukraine is willing to strengthen communications with China, and it looks forward to China playing a mediation role in achieving a ceasefire,” according to a Chinese readout, which cited Kuleba.

Wang’s call with Kuleba came amid escalation of the conflict. On Tuesday, Russian forces bombarded the regional government building in Kharkiv, Ukraine’s second city, killing at least 10 civilians, according to official accounts.

Meanwhile, a huge armoured column rolled towards the capital, Kyiv, raising fears Russia may resort to pulverising civilian areas. Kuleba tweeted a video of the huge explosion in Kharkiv’s Freedom Square, calling it a “barbaric missile strike” resulting from Vladimir Putin’s inability to “break Ukraine down”.

Western allies continue to show solidarity with Ukraine, piling pressure on Russia through sanctions and military assistance. China, however, said it “fiercely” opposes sanctions against Russia. It said dialogue “is the only way to stop the fighting”.

China has been watching the events closely. On Tuesday, Wang continued to take a balanced view on Russia’s action against its neighbour. He said while China believed the security of one country “should not come at the expense of the security of other countries”, regional security “cannot be realised through the expansion of military blocs”.

Wang told Kuleba the pressing task for now was “to ease the situation as much as possible to prevent the conflict from escalating or even getting out of control”. He also urged Ukraine to “assume corresponding international responsibilities”.

“China is trying to juggle a balanced position to support Russia’s ‘reasonable concerns’ and at the same time not to burn all the bridges,” said Yun Sun, the director of the east Asia programme at the Stimson Centre in Washington.

“[Beijing] will not give the world the satisfaction of opposing Russia. Putin knew it. Whatever Russia does, the US still looms large as the biggest threat to China. For that alone, China will not oppose Russia.”

Fintech Roundup: What’s the deal with the one-click checkout space?

Russia-Ukraine war latest: Ukraine not ‘willing to give up any territory’, Zelenskiy adviser says...