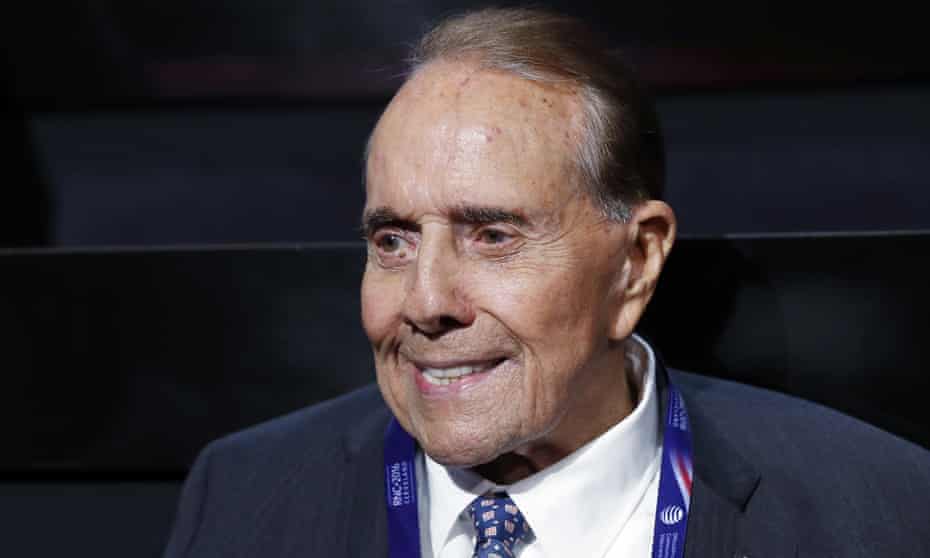 Bob Dole, the long-time Kansas senator who was the Republican nominee for president in 1996, has died. He was 98.

In a statement, the Elizabeth Dole Foundation, founded by Dole’s wife, said: “It is with heavy hearts we announced that Senator Robert Joseph Dole died earlier this morning in his sleep. At his death at age 98 he had served the United States of America faithfully for 79 years.”

In late February, Dole announced that he had advanced lung cancer and would begin treatment. Visiting him, President Joe Biden called Dole his “close friend”.

Born in Russell, Kansas in 1923, Dole served in the US infantry in the second world war, suffering serious wounds in Italy and winning a medal for bravery. His wounds cost him use of his right arm.

He entered state politics then became a longtime Republican power-broker, representing Kansas in the US House of Representatives from 1961 to 1969 and in the Senate until 1996. He had spells as chairman of the Republican National Committee and as Senate minority and majority leader.

In 1976 he was the Republican nominee for vice-president to Gerald Ford, in an election the sitting president lost to Jimmy Carter. Two decades later, aged 73, Dole won the nod to take on Bill Clinton.

Against the backdrop of a booming economy, the Democrat won a second term with ease, by 379–159 in the electoral college and by nine points in the popular vote, the third-party candidate Ross Perot costing Dole support on the right.

Dole received both the Presidential Medal of Freedom and the Congressional Gold Medal, the highest US civilian honours.

He was a figure from another time in Republican politics. On Sunday, the political consultant Tara Setmeyer, a member of the anti-Trump Lincoln Project, tweeted: “I cast my first ever vote for President for Bob Dole in 1996. A war hero with a sharp sense of humor … another piece of a once respectable GOP gone.”

Amid RBI’s tough stance, what will be cryptocurrencies’ fate in India?