There’s a lot of ways to make – and lose – money during a bear market. While the crypto market has rallied strongly this month, it’s too early to venture that the era of “up only” has returned. For traders trying to preserve their precious capital during an extended market downturn, there are numerous money-making strategies proffered. Copy trading, also known as social trading, is one. And then there’s grid trading.

If the concept of grid trading is new to you, you’re not alone. Expect to be hearing a lot more about the concept in the months to come, however, particularly if BingX has its way. The Singapore-based exchange is known for its automated trading strategies, social trading among them. It believes that grid trading is the next big thing for amateurs keen on mastering the markets without spending all day staring at a screen.

It might sound like a novel market based around the cost of bitcoin mining, or perhaps centered on energy markets, but grid trading is nothing of the sort. Rather, the concept entails automated buying and selling of crypto assets at intervals based upon a preset price range. This quantitative trading strategy can be visualized as a series of grids that demarcate buy and sell zones. 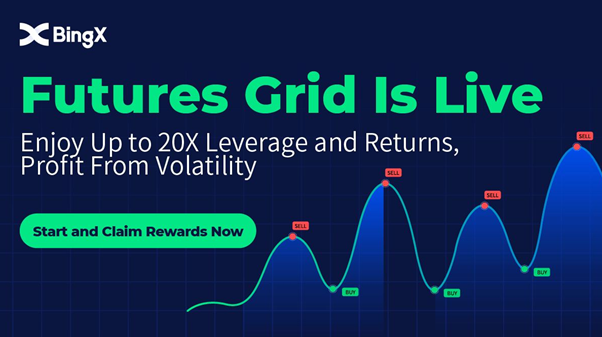 The theory goes something like this: crypto assets, while volatile, are prone to making repetitive intraday moves that can be predicted with a reasonable degree of certainty, just like coastal tides. Using a grid system, a basic “buy low, sell high” strategy can be executed. The profits skimmed from each of these trades can be tiny in percentage terms, but collectively they can quickly add up.

Campaigners In California Can Now Receive Donations in Cryptocurrency

With a profitable grid system, there’s no need to predict which way the market moves: you simply need to collect your profits from the ebb and flow of assets as they rise and fall each day.

Grid trading is a strategy wholly unsuited to human control: not only is it repetitive, but its successful execution demands the ability to trade without emotions. Eliminate human psychology from the equation and the system is far more efficient, which it’s designed for automated deployment. This, in a nutshell, is what BingX is offering.

While many traders are content to focus on the spot markets, others crave the high octane thrills that come from playing with leverage. Most crypto exchanges now offer derivatives, BingX included, and thus it’s not surprising that the Singaporean exchange has extended its grid trading feature to this market. In March, the platform rolled out grid trading for spot markets. Now it’s doing the same for derivatives. Futures grid trading operates in much the same way as spot grid trading, only there’s leverage injected. This increases the potential returns to be made, but also raises the risk.

With automated trading strategies, there needs to be realistic expectations about what can be achieved. If everyone made the same trades, no one would win. Similarly, no system is guaranteed to achieve profits every single time. If calibrated correctly, however, automated systems should generate consistent profits in excess of anything that casual traders could expect to achieve on their

What Is a QPU? | NVIDIA Blogs

Altcoins To Drop Heavily This Weekend With Bitcoin Dominance 47%