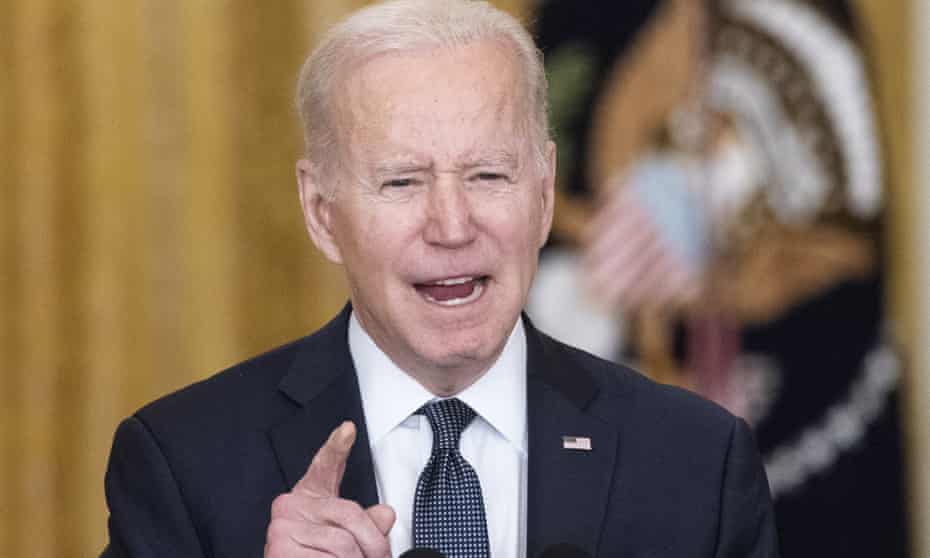 Joe Biden has claimed that 150,000 Russian troops remain in a “threatening position” around Ukraine, despite Russian claims of a withdrawal, and he warned that an invasion “remains distinctly possible”.

In a televised address from the White House on Tuesday afternoon, Biden combined a repeated offer of security talks with a warning of severe repercussions if Russia carries out an attack that US intelligence has reportedly assessed could take place as early as Wednesday.

He said he would “rally the world” to oppose Russian military action but made clear that the response would be primarily economic, saying: “I will not send American servicemen to fight in Ukraine.”

But he made clear that any attack on Nato territory or harm to Americans would be treated differently.

“We’re not seeking direct confrontation with Russia, though I’ve been clear that if Russia targets Americans and Ukraine, we will respond forcefully,” Biden said. “If Russia attacks the United States or our allies through asymmetric means, like disruptive cyber-attacks against our companies or critical infrastructure, we’re prepared to respond.”

Earlier in the day, the websites run by the Ukrainian defence ministry, the armed forces and the country’s largest commercial bank, PrivatBank, were closed down after a cyber-attack. The Washington Post cited intelligence sources as saying the attack was probably the work of Russian government hackers, but the White House said it could not comment on attribution.

Biden was speaking hours after Vladimir Putin had claimed that a “partial” drawdown of Russian forces from the Ukrainian border.

Asked for the reason for the drawdown on Tuesday, Putin was not forthcoming. “It’s a partial withdrawal of troops from the areas of our exercises,” he said in response to a question during a press conference with the German chancellor, Olaf Scholz. “What is there to comment on?”

In his televised address, Biden made clear the US was unconvinced by the Kremlin’s claims of a withdrawal.

“We have not yet verified that Russian military units are returning to their home bases. Indeed our analysts indicate that they remain very much in a threatening position,” the president said. “The fact remains right now Russia has more than 150,000 troops encircling Ukraine and Belarus and along Ukraine’s border. An invasion remains distinctly possible.”

Russia has always denied planning to invade Ukraine, saying it can exercise troops on its own territory as it sees fit. It has been pressing for a set of security guarantees from the west, including a guarantee that Ukraine will never join Nato.

Biden repeated the US and Nato position that they will not compromise on the right of Ukraine and other countries to decide their own security policy, including alliances.

“The United States has put on the table concrete ideas to establish a security environment in Europe. We’re proposing new arms control measures, new transparency measures, new strategic stability measures,” the president said. “We are willing to make practical result-oriented steps that can advance our common security. We will not sacrifice basic principles, though. Nations have a right to sovereignty and territorial integrity.”

Addressing the Russian people directly, the president said: “You are not our enemy, and I do not believe you want a bloody destructive war against Ukraine, a country and the people with whom you share such deep ties of family history and culture.”

“If Russia does invade in the days and weeks ahead, the human cost for Ukraine will be immense,” he said, adding it would be “a self-inflicted wound” for Russia.

He also prepared Americans for consequences, saying: “I will not pretend this will be painless, there could be impact on our energy prices.” He pledged that his administration would take steps to mitigate that impact.

In another sign of Russia turning the screw on Ukraine, the state duma voted on Tuesday to ask Putin to recognise the independence of the two Russian-controlled separatist regions in the east of the country.

All the Nostalgic “Fresh Prince” Nods in “Bel-Air”

Putin, hinting that he intended to use them as leverage, said he would not recognise the “republics” immediately, but called on Nato to negotiate with him on Russia’s security guarantees before it was “too late”.

“We hear that Ukraine is not ready to join Nato; we know that,” Putin said. “At the same time, they say it’s not going to join tomorrow. But by the time they get ready for it, it may be too late for us. So we have to decide this question now, right now, in the very near future, we have to have a negotiation process for this.”

The drawdown was first announced on Tuesday morning by the defence ministry spokesperson, Igor Konashenkov, who described ongoing exercises that involved forces from “practically all military districts, fleets and the airborne forces”.

The defence ministry released video apparently shot in Crimea of Russian tanks and other heavy weaponry from two brigades being loaded on to railway cars. Otherwise, the Russian military gave little information about which forces would be withdrawn and where they would be sent.

Ukrainian officials said they would not take Moscow at its word about a drawdown. “Many statements are constantly being made from [Russia], so we have a rule: we’ll believe it when we see it,” said Dmytro Kuleba, Ukraine’s foreign minister. “If we see the withdrawal then we will believe in de-escalation.”

“We’ve always said the troops will return to their bases after the exercises are over. This is the case this time as well,” he said.

Scholz arrived in Moscow on Tuesday for meetings with Putin, the latest in a series of visits and phone calls from western leaders seeking to avert a potential war through negotiations.

Putin said he was “ready to work further” with the west on how to de-escalate the crisis on the Ukrainian border, while Germany’s chancellor said the diplomatic channels were “not yet exhausted”, at a joint press conference marked by subtle swipes and simmering historical resentment.

“We are ready to work further together, we are ready to go down the negotiations track,” said Putin, who denied that his country was seeking an invasion of Ukraine. “As to whether we want [war]: of course not. That’s why we have made these proposals about negotiations, the results of which should be an agreement about equal security for all countries, including ours.”

Russia has previously announced the conclusion of military exercises near the Ukrainian border, but social media and satellite photography taken in the following days have not shown considerable changes to Russia’s force posture. Those exercises involved only a small number of troops.

Many of the troops located close to the Ukrainian border are not involved in any formal training.

Russia is holding large joint exercises with Belarus scheduled to end on 20 February. Western countries have said those drills could be used as cover to prepare for an attack on Ukraine, while Russia has said the troops will return to base once the exercises have concluded.

Russia’s defence minister, Sergey Shoigu, met Syrian president Bashar al-Assad after arriving in Syria to oversee the drills that mark the biggest Russian naval deployment to the Mediterranean Sea since the cold war.

Urban cooperative banks get relief for investing in umbrella organisation

The Financial Dark Ages Are Ending Thanks To Bitcoin

‘Gas was like our drug’: defiant Poland vows to wean itself off Russian energy