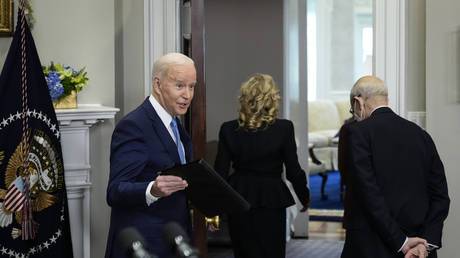 US President Joe Biden kept true to his promise to nominate the first black woman to the Supreme Court, announcing DC Circuit Court Judge Ketanji Brown Jakcson, a name that had previously been tipped as his likely pick by multiple news outlets.

The White House called Jackson an “exceptionally qualified and historic nominee” in a Friday statement. The announcement will be followed by an address by Biden later in the day, according to the White House.

I’m proud to announce that I am nominating Judge Ketanji Brown Jackson to serve on the Supreme Court. Currently serving on the U.S. Court of Appeals for the D.C. Circuit, she is one of our nation’s brightest legal minds and will be an exceptional Justice.https://t.co/iePvhz1YaA pic.twitter.com/Nzqv2AtN8h

Senate Minority Leader Mitch McConnell released a statement congratulating Jackson on her nomination, but suggested he and other Republicans could be a “no” vote on the nominee, recalling that he also opposed Jackson when she was nominated to the DC Circuit Court a year ago.

“Since then, I understand that she has published a total of two opinions, both in the last few weeks, and that one of her prior rulings was just reversed by a unanimous panel of her present colleagues on the DC Circuit,” McConnell wrote. “I also understand Judge Jackson was the favored choice of far-left dark-money groups that have spent years attacking the legitimacy and structure of the Court itself.”

I look forward to meeting with Judge Jackson in person and carefully reviewing her nomination during the vigorous and thorough Senate process that the American people deserve. My full statement: https://t.co/cpUAz1Mcq2

McConnell previously ignited controversy by refusing to schedule a hearing on Barack Obama’s Supreme Court nominee Merrick Garland in 2016, the final year of the then-president’s second term in office.

6 dead, at least 12 injured in shooting in downtown Sacramento, Calif.

Bitcoin Rejects Downside At $29k, Here’s Why This Is Good