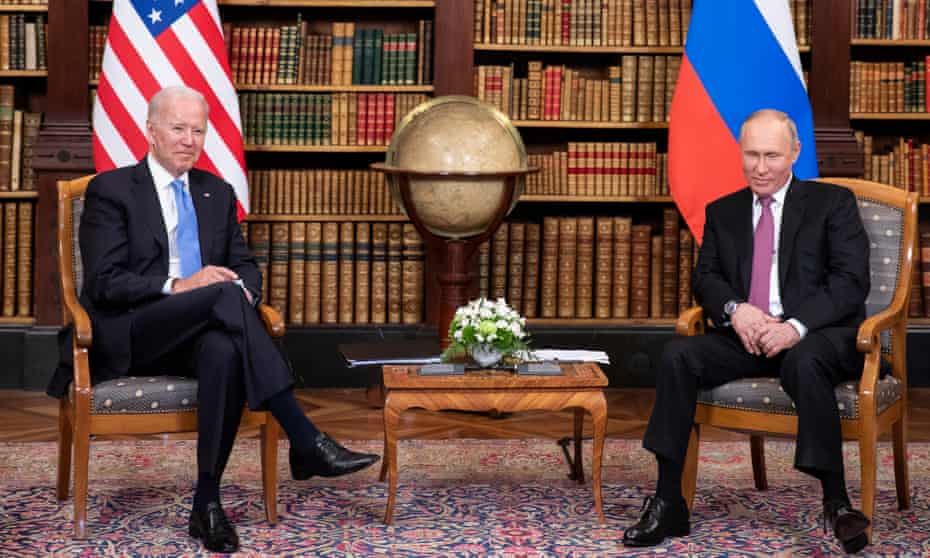 The White House said on Saturday Joe Biden would hold a call with Vladimir Putin on Tuesday, to underline US concerns about Russia’s buildup of forces on the border with Ukraine.

Diplomats indicated earlier this week that Biden and Putin would talk.

A statement released on Saturday evening said the US president would “hold a secure video call” with his Russian counterpart.

“The leaders will discuss a range of topics in the US-Russia relationship, including strategic stability, cyber, and regional issues,” the statement said.

“President Biden will underscore US concerns with Russian military activities on the border with Ukraine and reaffirm the United States’ support for the sovereignty and territorial integrity of Ukraine.”

Kyiv and Nato powers accuse Russia of building up troops near Ukraine, sparking fears of a possible attack. Moscow denies any such plan and accuses Ukraine of building up its own forces in its east, where Russian-backed separatists control a large part of Ukrainian territory.

The Kremlin said the two leaders would also talk about bilateral ties and the implementation of agreements reached at their Geneva summit in June.

“The conversation will indeed take place on Tuesday,” Kremlin spokesman Dmitry Peskov told Reuters. “Bilateral relations, of course Ukraine and the realization of the agreements reached in Geneva are the main [items] on the agenda.”

The exact timing of the call was not disclosed.

More than 94,000 Russian troops are believed to be massed near Ukraine’s borders. The Ukraine defense minister, Oleksii Reznikov, said on Friday that Moscow may be planning a large-scale military offensive for the end of January, citing intelligence reports.

US officials have come to similar conclusions, they said.

Biden has rejected Russian demands for security guarantees in the region.

“My expectation is we’re going to have a long discussion with Putin,” Biden told reporters on Friday as he departed for a weekend trip to Camp David.

The US president said he and his advisers were preparing a comprehensive set of initiatives aimed at deterring Putin from an invasion. He did not give further details, but the administration has discussed partnering with European allies to impose more sanctions on Russia.

Biden’s defense secretary, Lloyd Austin, separately said Washington was committed to ensuring Ukraine had what it needed to protect its territory. Austin added that there was a lot of space for diplomacy and leadership to work on Ukraine.

Moscow accuses Kyiv of pursuing its own military build-up, has dismissed as inflammatory suggestions that it is preparing for an attack on its southern neighbor, and has defended its right to deploy troops on its own territory as it sees fit.

US officials say they do not know yet whether Putin has made a decision to invade Ukraine.

US-Russia relations have been deteriorating for years, notably with Russia’s 2014 annexation of Crimea from Ukraine, its 2015 intervention in Syria and US intelligence charges of meddling in the 2016 election won by Donald Trump. Relations have become more volatile still in recent months.

The Biden administration has asked Moscow to crack down on ransomware and cyber crime attacks emanating from Russian soil, and in November charged a Ukraine national and a Russian in one of the worst ransomware attacks against US targets. Russia has repeatedly denied carrying out or tolerating cyber attacks.

The two leaders have had one face-to-face meeting since Biden took office in January, in Geneva in June. They last talked by phone on 9 July. Biden relishes direct talks with world leaders, seeing them as a way to lower tensions.

His secretary of state, Antony Blinken, warned Russian foreign minister Sergei Lavrov in Stockholm earlier this week that the US and European allies would impose “severe costs and consequences on Russia if it takes further aggressive action against Ukraine”.

Earlier on Saturday, Russia said an Aeroflot airliner flying from Tel Aviv to Moscow was forced to change altitude over the Black Sea because a Nato CL-600 reconnaissance plane crossed its flight path.

The state airline said flight SU501 carrying 142 passengers had to drop 2,000ft on Friday after air traffic control told it another aircraft had crossed its path. The crew were able to see the other plane, it said.

The aviation authority, Rosaviatsia, said a smaller CL-650 aircraft flying from the Black Sea resort of Sochi to Skopje also had to change course. It did not say which Nato member the reconnaissance aircraft belonged to. Russia’s Defence Ministry said on Friday it scrambled fighters to escort two US reconnaissance planes over the Black Sea. The US embassy in Moscow made no immediate comment about the incident.

Rosaviatsia said an increase in flights by Nato was creating risks for civilian planes and that Moscow planned to lodge a diplomatic complaint.

The Roads To Hyperbitcoinization: Describing The ‘Transition Agents’ Bringing Us Financial Freedom

Introducing FairSide: The Widest and Most Fair Cover Protocol