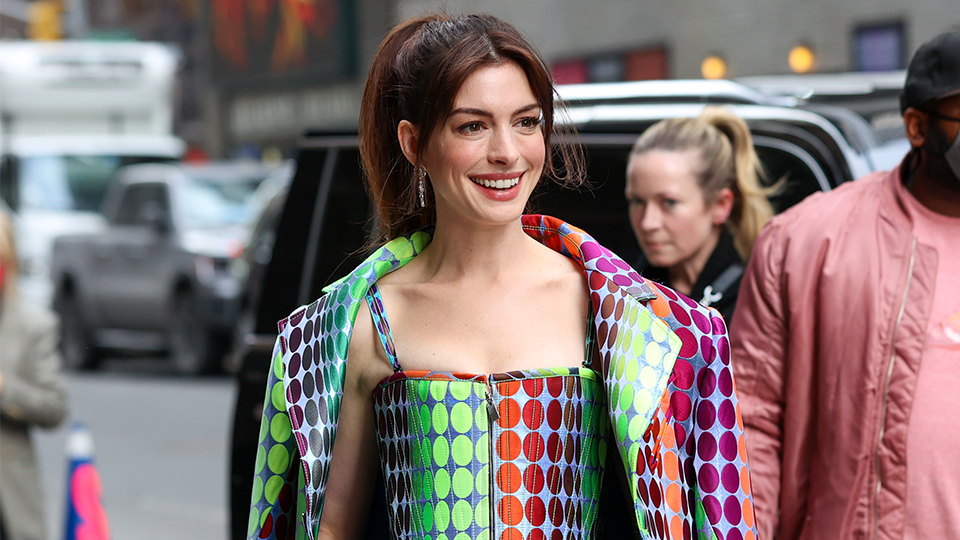 If you wake up and begin your day by scrolling through Instagram (guilty), your morning may have looked a little something like this. Scroll to Bella Hadid, double-tap and repeat. Scroll to the SKIMS swim launch, double-tap and repeat. Scroll to Anne Hathaway—wait a second—Anne Hathaway(!), triple tap and save. Anne Hathaway’s rainbow jumpsuit brought a surprising pop of color to my fashion timeline this morning and I haven’t seen a look this good since, well, the makeover scene in The Devil Wears Prada.

After starring as Andy in The Devil Wears Prada back in 2006, Anne Hathaway cemented her status as a fashion icon. The only problem is, we’ve been in a Hathaway fashion moment dry spell. The actress doesn’t post street-style pics or thirst traps (let’s be real, she’s too cool for that) on Instagram so all we have to fuel our A-list inspiration are a few red carpet moments. You can imagine my surprise when I saw Anne Hathaway pictured on the street of New York City in an incredible rainbow jumpsuit. Florals for spring may no longer be considered groundbreaking, but Hathaway’s latest look certainly is.

The actress wore a rainbow polka dot wide-leg jumpsuit with a belt cinched at the waist. The look was accompanied by a matching oversized blazer, strappy purple heels and minimal jewelry. Hathaway’s casual ponytail made the look feel more grounded and was the perfect pick for her appearance on The Late Show With Stephen Colbert. 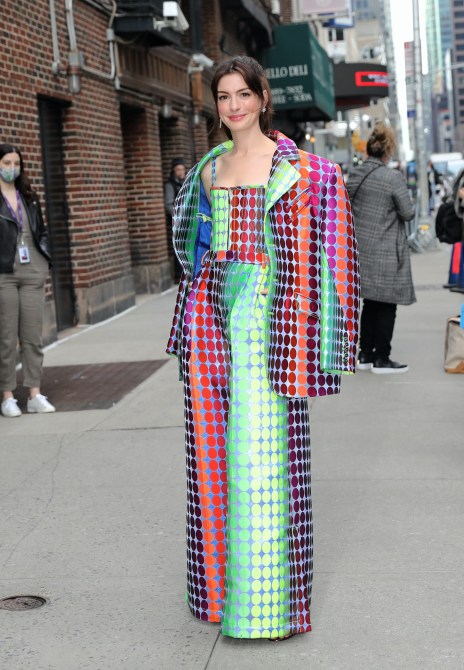 The bright ensemble can be credited to New York based designer, Christopher John Rogers, who is known for creating over-the-top colorful looks. His designs have been worn by icons ranging from Michelle Obama to Cardi B—and now Anne Hathaway can officially be added to the list. 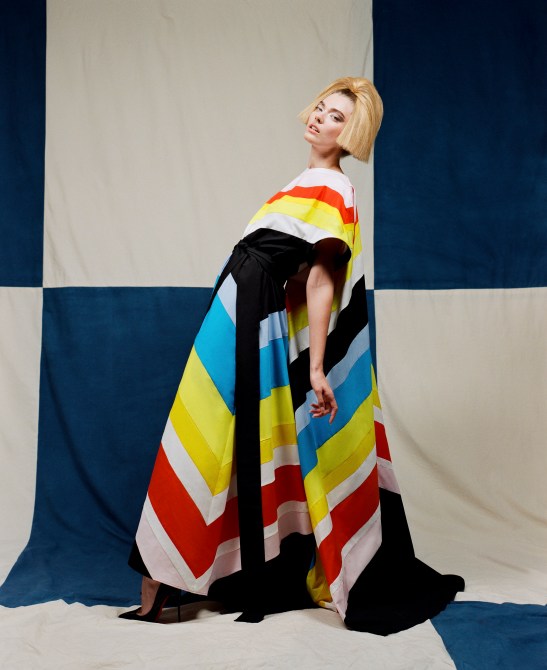 This striped rainbow dress from Christopher John Rogers’ Spring/Summer ’21 collection encompasses the same vibe as Hathaway’s look and is a great representation of Rogers’ design style.

Anne Hathaway’s personal style typically leans toward minimalism. She is often seen wearing classic denim, neutral sweaters and classically glamorous dresses—she honestly is an elevated version of her character Andy. Her Christopher John Rogers look reminded me of the “after” in the movie’s makeover scene and I’m sure Miranda Priestly would be pleased. 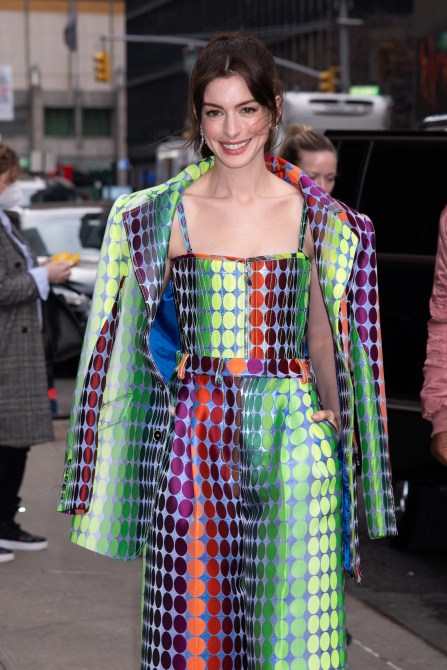 In her interview with Stephen Colbert, Anne Hathaway says she had worked on “a baby” in the last three years (Hathaway has two children) and was excited to be back in front of a live audience. I’m hopeful that we’ll be getting many more fashion moments from Hathaway as she begins to promote the AppleTV+ series, We Crashed, about the fall of WeWork which she stars in with Jared Leto.

In the meantime, we can rejoice that one of the OG fashion icons has returned (and thankfully doesn’t need to relive every ‘90s fashion trend since she’s already worn them). I’m counting her rainbow jumpsuit as a win for maximalist fashionistas—no need for a makeover here.

Founded by ex-dLocal and AstroPay execs, Datanomik is bringing open banking to LatAm

Why Should I Care About Bitcoin?