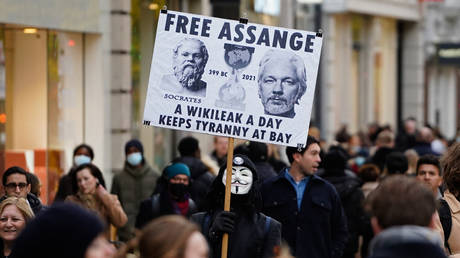 The former Ecuadorian president, who hosted a show on RT Spanish, said that those going after Julian Assange want to discourage others from exposing war crimes. The prosecution is a total sham, he argued.

“It’s such a paradox that on the International Human Rights Day a tremendous attack was committed on the human rights of a journalist – for the sin of having told the truth,” Rafael Correa, who ruled Ecuador between 2007 and 2017, told in an interview to RT Spanish, where he hosted a talk show.

A British High Court ruled on Friday that the WikiLeaks co-founder could be extradited to the US, where he is wanted on espionage charges.

Under Assange’s helm, WikiLeaks published troves of classified materials about US’ war in Afghanistan and Iraq, including a harrowing video of American helicopters gunning down civilians in Baghdad in 2007.

“War criminals are persecuting the one who denounced them,” Correa said, dismissing the case against Assange as “total hypocrisy.”

If Assange would have exposed the secrets of China, Russia or left-wing Latin American governments, including my government, he would have been praised by the international press, honored by US Congress and the British parliament. But because his actions were against the interests of the US, the hegemonic country, he was labeled a criminal.

Correa said that the goal of the prosecution was to scare others so that “nobody else dares to denounce the secrets of great powers.” He argued that war crimes should not be treated as protected state secrets. “The whole world must know about them. Such crimes must be punished.”

In 2012, fearing extradition to Sweden over a rape investigation that was later dropped, Assange jumped bail and hid inside the Ecuadorian Embassy in London. He was granted asylum by Correa’s government, but that decision was reversed nearly seven year later under Correa’s successor Lenin Moreno. In 2019, Assange was accused of violating asylum terms and ejected from the embassy. He was immediately arrested by British police and jailed.

A lower UK court ruled against extraditing Assange earlier this year, citing concerns for his mental health. The US appealed the verdict and won after promising not to keep Assange in solitary confinement and otherwise reduce the risk of him committing suicide behind bars.

Assange’s legal team and supporters promised to appeal the verdict.

Indian Rupee declines by 10 paise to 75.88 against US dollar

Bitcoin Is A One-Way Hash Function

I get shooting butt pain during my period, so I decided to find out...